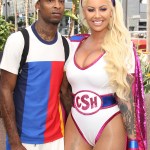 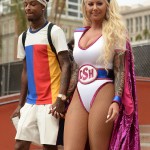 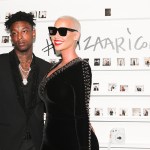 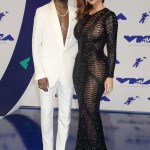 Has Amber Rose found ‘the one’ in 21 Savage? While watching her bae rock Lollapalooza on Aug. 5, she confessed that she was so in love that she was going to marry him!

It seems there may be wedding bells in the future for Amber Rose, 33, and 21 Savage (the 24-rapper whose real name is Shayaa Bin Abraham-Joseph.) 21 Savage was on hand to light up Grant Park, Chicago as part of Lollapalooza, according to Hot New Hip-Hop. As he was “bring some major heat,” Amber was feeling a bit hot and bothered over her boyfriend. In a pair of posts that were uploaded to her Instagram story, not only did Amber say “I love him,” but she wrote “Imma marry him.” It seems Mr. Savage is about to become the next “Mr. Rose.”

If that wasn’t enough to prove Amber’s heart belonged to him, she was rocking a “21 Savage” chain (at least, a blinged-out “21”) when she arrived at Lollapalozza. She even tagged 21, showing that he’s quite literally near and dear to her heart. Maybe he was the one who picked it out for her? After all, he and Amber appeared in her Instagram Story in July, flashing diamond-encrusted watches. “We like spoiling each other,” she captioned the shot. Sweet.

The couple that makes it rain together, stays together. 21 Savage definitely was throwing some money around when he, Amber, Cardi B, 24, and Offset, 25, had a double date at a strip club on July 31. 21 Savage was showering strippers with money while Amber, rocking a tight, white jumpsuit, sat next to him. In addition to being one of the more unusual date nights (well, unusual if you happen to not be Amber Rose) this double date seemed to squash that rumored beef between Amber and Cardi.

Speaking of squashing beefs, Blac Chyna, 29, seemed to mend thins with her BFF when she heard that Amber was thinking about getting breast reduction surgery. Though their relationship has cooled off a bit, due to the Rob Kardashian drama, Blac was quick to reach out to Amber to warn her against getting the surgery. Blac also told her friend that she’s “beautiful, sexy and perfect” just the way she is, an insider EXCLUSIVELY told HollywoodLife.com. Aww. Does this mean Blac will be Amber’s maid of honor whenever she ties the knot with 21 Savage?

Do you think Amber and 21 should get married, HollywoodLifers?