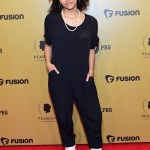 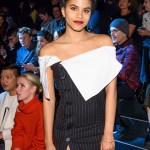 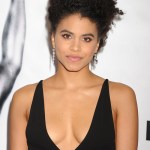 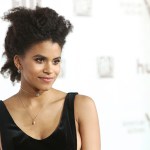 Get ready, superhero fans. Zazie Beetz is about to slay ‘Deadpool 2’ as the dynamic and deadly Domino. Before the blood-splattered romp hits the big screen, get to know all about the amazing actress bringing the character to life.

1. She was born in Germany. Casting the mutant Domino for Deadpool 2 was no easy task, but it seems as if director David Leitch nailed a home run by picking Zazie Beetz, 26, to bring the Marvel comics character to life. Ryan Reynolds, 40, the man who plays the “Merc with a mouth,” debuted Zazie’s Domino on July 31. As her Domino lounged on Deadpool’s trademark crimson costume, Ryan said, “some people just know hot to work a red carpet.” Considering that Domino is an international mercenary, it’s good they bought an international actress. Zazie’s father is a German cabinetmaker, while her mother is an African-American social worker, according to Nylon.

2. She’s a relatively new star. While growing up between Washington Heights in New York City and Berlin, she attended the LaGuardia High School. She majored in French with a minor of theater at Skidmore college. Her big break came when she auditioned for the role of Vanessa of Donald Glover’s Atlanta, the comedy-drama television series. Even though she feels she did a “terrible job,” she landed a role, which launched her career. She also appeared in two episodes of the Netflix anthology series, Easy, but she’s still a fresh face.

3. She proudly considers herself a feminist. “I don’t understand, honestly, when women say they’re not feminists,” she tells The Frisky. “I don’t even get it. Or when they’re like, “I’m not a feminist because I love my husband.” WHAT? That makes absolutely no sense to me. I 100% identify as a feminist…. I feel this daily reminder that I am nothing but a sexual object and a movement of power for many men just walking down the street. There’s no way to put unless you’ve experienced being hit on the street every single fucking day of your life.”

4. Zazie’s also passionate about the environment. Zazie’s social conscious came up while speaking with Donald Glover for an interview in (oddly enough) Interview Magazine. “[R]ecently I’ve realized that the body, the world, and the mind are all one thing. I’ve begun feeling that my responsibility is to the Earth,” she said. “Our generation’s war is climate change, so I’ve really been modifying how I eat and what I eat. … I struggle with feeling like I should go completely vegan, but I had a donut yesterday, and that shit was good.”

5. She would like to try a biopic next. With Atlanta coming back in 2018 (the same year Deadpool 2 will be released), she’s about to blow up. What would she like to do next?” “One day I’d like to tackle a biopic,” she said, citing how she was influenced by “Josephine Baker, Billie Holiday, and Nina Simone.”

What do you think about Zazie, HollywoodLifers? Are you excited to see her as Domino in Deadpool 2?