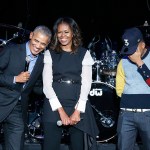 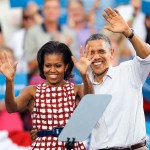 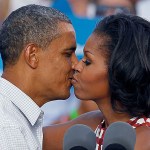 Happy Birthday, Barack Obama! The 44th president of the United States turned 56 on Aug. 4, and fans celebrated #ObamaDay by sharing some of their favorite moments from when Barack was in the White House.

It’s been less than seven months since Barack Obama left the White House in Donald Trump’s hands, but to many American citizens, he’s still the president. When he turned 56 on Aug. 4, many of the former-president’s admirers flocked online to celebrate #ObamaDay. Many shared their favorite moment from Barack’s 8-years at 1600 Pennsylvania Avenue. From his epic mic drop at his very last White House Correspondents’ Dinner to when he posed in a tiara with Girl Scouts, people were reliving their best memories of Barack Obama.

“When I lose faith in humanity, I remember the beautiful human [Barack Obama,]” one person tweeted. The person who shared the Obama and Girl Scouts photo, @NerdyWonk, remembered Obama as being a president who “championed girls and women in [Science, technology, engineering and mathematics.]” Voice actress extraordinaire Tara Strong, 44, shared a “Calm Down. I got this” meme of the president, while hoping that he was “secreting saving the country” from the current president. Perhaps the sweetest message came from Michelle Obama, 53, who said she was still in love with the “phenomenal guy I married nearly 25 years ago.”

This will be the first time that Barack can celebrate his birthday “like a normal person” in nearly ten years. In 2016, the White House threw a massive bash that included Beyonce, 35, JAY-Z, 47, and more, according to the Huffington Post. The year before, he dined at Rose’s Luxury, a popular Washington D.C. restaurant. Barack and Michelle may just go back to Rose’s, as he has remained in D.C. after leaving the White House.

Another year older, but the same phenomenal guy I married nearly 25 years ago. Happy birthday, @BarackObama — we love you so much! pic.twitter.com/3WrcGiKgz1

HAPPY #ObamaDay!!! It is our President's birthday so let's celebrate with your favorite images of him and the family all day!! pic.twitter.com/Canaptlc1a

Happy #ObamaDay to the man who looked cool rocking a Girl Scouts Brownie crown while championing girls and women in STEM. pic.twitter.com/yuCgpX1l65

Happy birthday @BarackObama #ObamaDay we miss u! We hope you are secretly saving the country from the lying gross maniac pic.twitter.com/SGgdGBFkhL

Or, maybe Barack and Michelle will call up Liz Whitlow to see what she’s doing. Liz sent the Obamas an invitation to her daughter’s wedding in March, according to Us Weekly, and the former-first family actually sent a response! “Congratulations on your wedding,” their response read. “We hope that your marriage is blessed with love, laughter, and happiness and that your bond grows stronger with each passing year.”

“This occasion marks the beginning of a lifelong partnership, and as you embark on this journey,” the letter also read, “know you have our very best for the many joys and adventures that lie ahead.” Liz’s daughter, Brook Allen, shared the picture on Twitter, along with the conversation with Liz that revealed she “didn’t send [an invitation] to Trump.” Call it another reason to adore the Obamas. Happy Birthday, Barack!

Are you celebrating Obama Day, HollywoodLifers? What was your favorite Barack moment?