Like a phoenix emerging from the ashes, Jourdan Dunn’s new tattoo is so hot — it may set the world on fire! The supermodel posed topless while revealing her new tattoo and it’s a sight to behold!

Got to give props to Jourdan Dunn, as the 26-year-old model mixed tattoos, mythological creatures and fine culture all in one photo. The young supermodel revealed her latest ink on Aug. 2, sharing a photo of her new piece to her Instagram. While posing without a top (while tastefully covering her breasts) Jourdan showed off the impressive artwork now decorating her ribs. “Still I Rise,” she captioned the pic, adding the hashtag #riseofthephoenix.

Jourdan also (inadvertently?) dropped some poetry on her followers, as the line “Still I Rise” is the title of one of the late Maya Angelou’s most well known poems. “You may write me down in history / With your bitter, twisted lies, / You may trod me in the very dirt / But still, like dust, I’ll rise,” the first stanza reads. “Does my sassiness upset you? / Why are you beset with gloom? / ’Cause I walk like I’ve got oil wells / Pumping in my living room.” The poem – with its themes of fighting against oppression and inequality of African American people, per Poem Analysis – is a declaration that no matter how much someone tries to hold her down, a person will “rise” above it all.

Wow. Talk about a statement piece. Jourdan has nine other tattoos, according to PEOPLE. Along with this new phoenix, Jourdan her son’s name, Riley, on her right hand, the Egyptian goddess Iris at the nape of her neck, and matching “DD” tattoos with Cara Delevingne, 24 (standing for “Dunn” and “Delevingne”. She also has designs on her bicep and on her left ribs. 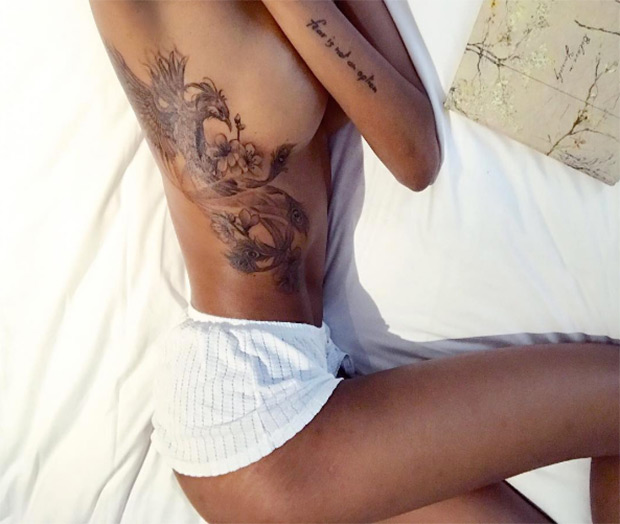 Jourdan spoke on similar political issues addressed in Maya’s poem while talking with FASHION magazine. She splits her time between New York and London, where her 7-year-old son lives. While back in the U.K, Riley asked why Jourdan would want to live in the United States. “He said, ‘Mommy, you’re black; aren’t you scared that you’re going to be killed?’ That’s a very hard thing to hear that your son thinks that,” she said. “I was taken aback, and I just had to reassure him that I’m going to be OK. But it’s sad that he even had to ask me.”

What do you think about Jourdan’s tattoo, HollywoodLifers? Do you like the piece? Are you going to get something similar?