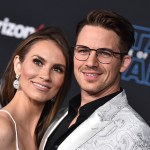 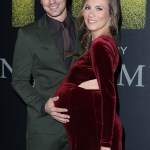 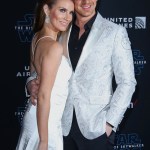 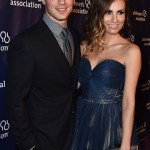 Matt Lanter’s going to be a dad! But even better, the ‘90210’ alum announced the exciting news with an adorable ultrasound photo! We could not be happier for the actor & his wife Angela, and they revealed they’re just gushing with joy!

Matt Lanter, 34, and his wife Angela Stacy had “HUGE” news to announce on Aug. 2. The Timeless star took to social media to reveal that he and Angela are officially about to become parents, and that they could not be happier about welcoming a new addition. “HUGE NEWS! – We have a Jedi joining the family in 2018! …We sense The Force is strong with this one!” Matt posted via Twitter to tell his fans the big news. The couple also sat down with People magazine and dished about becoming parents for the first time. Click here to see adorable pics of celeb dads and their kids.

“We are both overjoyed to be blessed with this new addition to our family!” the duo gushed. “I think we are most looking forward to experiencing all of the firsts.” They continued, “First steps, first words, first everything. We keep picturing the quiet moments (after the loud ones, of course) and morning snuggles with our baby!” How sweet is THAT? Already into her second trimester, Angela, who’s a popular YouTuber, also revealed her early pregnancy struggles. “The first trimester was a little bumpy,” she said. “I was pretty much textbook for all first trimester symptoms, but after battling endometriosis for many years, we are just so beyond thankful to have the chance to become parents.”

Matt and Angela tied the knot back in 2013 and currently live in L.A. along with Ahsoka, their Maltipoo puppy. And apparently Matt is already a dotting dad! “Matt has gone above and beyond any expectation I could have had,” Angela said. “From taking care of me when I’m feeling sick, to never missing a doctor’s appointment.” As for the star, who’s also the longtime voice of “Anakin Skywalker” in the TV series Star Wars: The Clone Wars, he feels he’s just doing his part for his ladylove! “It’s been a roller coaster ride so far!” he said. Congrats again, you two!

HUGE NEWS! – We have a Jedi joining the family in 2018! …We sense The Force is strong with this one! @angelalanter pic.twitter.com/t2Y0NVtQqN

Tell us, HollywoodLifers — are you excited for Matt and Angela? Congratulate the happy couple below!