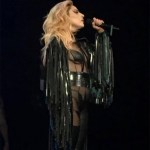 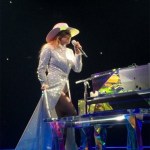 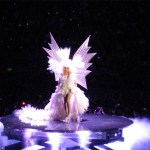 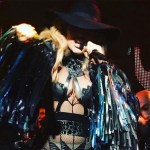 Get ready, Little Monsters — Lady Gaga’s ‘Joanne’ tour is officially underway! The singer kicked things off with a sold-out concert in Vancouver on Aug. 1, and we’ve dug up everything you can expect if you attend a show!

Six months after Lady Gaga announced she’d be hitting the road for her Joanne world tour, she performed her first show of the five-month stretch…and from what we’ve seen on Twitter, it looks totally EPIC! Unsurprisingly, Gaga wears several outfits throughout the course of the evening, and they look pretty darn awesome. There’s no meat dress, but Twitter users uploaded photos of the 31-year-old in ensembles like a glittering white trenchcoat, a massive, white ballerina skirt and skintight black top, a blue, bedazzled body suit (WITH matching keytar), and a black, bonadage-looking get-up, among others. See all the looks in the gallery above!

Obviously, the show looks to be a MAJOR production, with a main stage and three smaller ones throughout the arena, so Gaga can really command the full crowd. It even looks like there’s a GIANT catwalk she stands on at one point that flies over the crowd! Plus, there’s hundreds of lights illuminating the stage and bright colors shining throughout the performance. Gaga also plays a number of instruments throughout the evening, including a massive piano and a pink guitar. Of course, she’s also dancing for a good portion of the show, requiring her to be hands-free a lot of the time.

HollywoodLifers, will you be checking out the Joanne world tour? What are you most excited for?