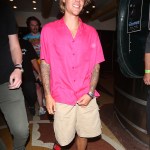 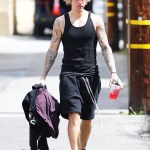 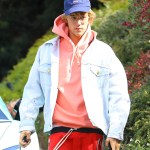 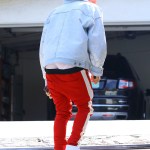 Sorry not sorry! Justin Bieber may have canceled his Purpose tour, but that doesn’t mean he can’t rock the merch, right?

If you had clothing with your face on it, would you wear it out? Justin Bieber, 23, stepped out in Los Angeles on Tuesday rocking his own merchandise — a black tee with a photo of himself sitting on a dirt bike on the front and his Purpose Tour cities on the back. He paired that with yellow shorts from his collection — they even have his name plastered on them. Oddly enough, this comes just a week after announcing that he would not be finishing out the tour.

“Justin loves his fans and hates to disappoint them. He thanks his fans for the incredible experience of the Purpose World Tour over last 18 months. He is grateful and honored to have shared that experience with his cast and crew for over 150 successful shows across 6 continents during this run,” his team said in a statement on July 24. “However, after careful consideration he has decided he will not be performing any further dates. Tickets will be refunded at point of purchase.”

While we know Justin has been taking time to focus on himself, reports began surfacing that he was canceling his tour to be more involved with his church, Hillsong, and work more with the Pastors Carl Lentz, 32, and Rich Wilkerson, 33. However, the church released a statement explaining they had nothing to do with his tour coming to a halt. Sources have told HollywoodLife.com that Justin just wants to step out of the spotlight for a bit and focus on getting his life back. He was “biting off more than he could chew,” a source told us, adding he was honestly exhausted.

HollywoodLifers, do you think it’s strange that Justin is wearing his own merch?