So, when we say “PDA,” we actually mean that Lil Uzi Vert (real name Symere Woods), 23, and new girlfriend Brittany Renner were straight-up licking each other on Snapchat. It’s as sexy (or uncomfortable, depending on your preference) as it seems! Scroll down to see the full photo in all its glory. The photo was posted to Snapchat, and it instantly started making the rounds as soon as fans saw Uzi with the hot Instagram model.

The photo was taken on Uzi’s 23rd birthday, July 31, and it seems like he got the best present: major PDA with Brittany! In the pic, the “Do What I Want” rapper is grasping Brittany’s back tightly as she throws her arms around his waist. He’s playfully kissing — um, licking — her face as she laughs. Brittany looks incredible, wearing a simple, but sexy outfit of skintight, high-waisted leggings, and a cropped, grey tee. She accessorized with sneakers and a grey baseball cap. It’s obvious why Uzi’s so enthralled with her.

Uzi apparently has a thing for girls named Brittany. The rapper just ended his relationship with his ex-girlfriend, Brittany Byrd, at the end of July. It’s unclear what led to their breakup. Uzi’s new girlfriend is a total catch, though. Brittany’s a major social media figure who has gained a massive amount of followers for her beautiful photos and fitness tips. She was rumored to be dating 49ers player Colin Kaepernick in 2014, but that was full of drama, and was never confirmed. It’s unclear how long Uzi and Brittany have been dating, but it seems like from this pic that they’re still in the honeymoon stage. 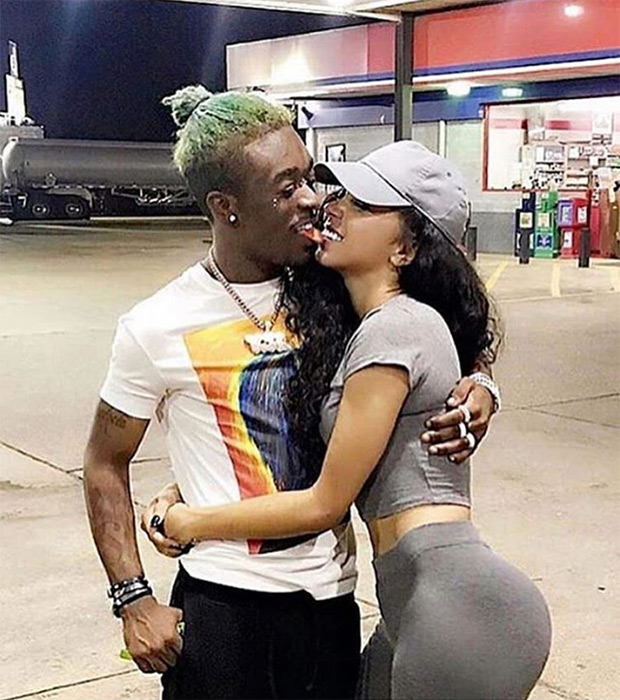 HollywoodLifers, are you shocked by Lil Uzi’s face-licking PDA snap? Let us know!

Related: Eden Polani: 5 Things To Know About Model, 19, Seen Out With Leonardo DiCaprio, 48