Aw, THERE they are! After much anticipation, Beyoncé & JAY-Z have finally given fans a 1st look at their precious baby twins, and they are QUITE the cutie pies! You’ve got to see this breathtaking pic!

Beyoncé, 35, and JAY-Z‘s, 47, twins have arrived, and they are BEYOND adorable! After reportedly giving birth on June 12, Beyoncé finally shared a snap of her and JAY’s infants via Instagram on July 13, and the super precious pic is everything we needed! Of course Queen Bee would go ALL out for her twin’s public debut. The songstress looks like a goddess in her ethereal photo shoot, wearing a colorful layered gown and blue veil. Sir and Rumi Carter are both rocking a full head of hair and they look so incredibly flawless. Bey is truly glowing while holding her bundle of joys near the glistening ocean.

Amazing, right? By this point it’s pretty obvious that every photo Beyoncé posts is meticulously planned and thought out. We have to assume the same goes for this epic first photo. After all, the “Formation” singer announced her pregnancy back in February with a memorable and unique photo that was soon followed by an entire photo shoot that had historic and even religious ties.

“Beyonce’s pregnancy announcement photos make a great many references to works of art, both famous and little known,” Dennis Geronimus, Associate Professor and Chair of the Department of Art History at New York University, revealed to BAZAAR.com after the pics went public. “Who can say if all of these references are entirely intentional, but Beyoncé and her photographer do seem to know their art history!” 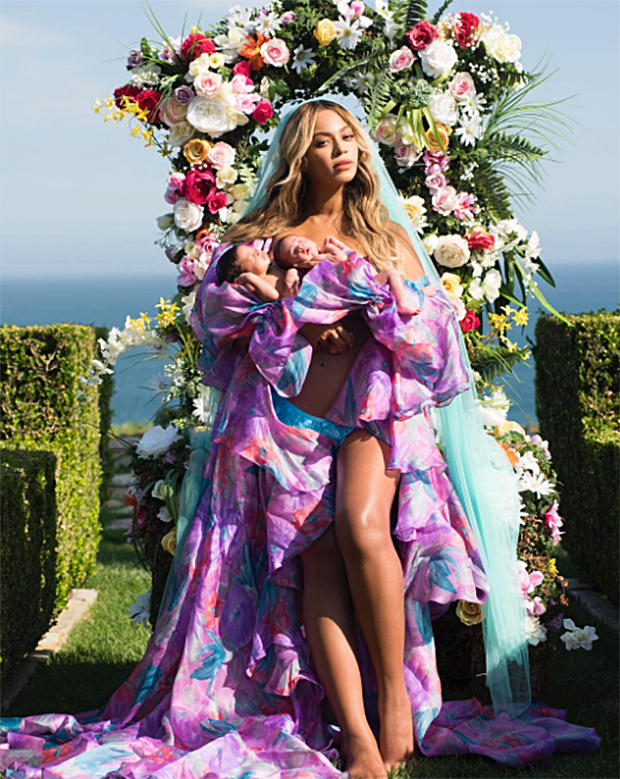 Now that the twins have actually arrived, we can only imagine more creative pics will follow, and we can’t wait to dissect them! But one thing’s for sure regardless of any possible hidden meanings, these newborns are SUPER cute and we can’t wait to see more where this came from!

Tell us, HollywoodLifers — do you love this pic of Jay and Bey’s twins? Do you think we’ll be seeing more of them soon?