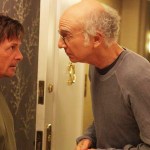 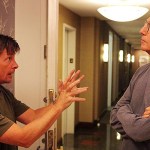 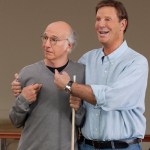 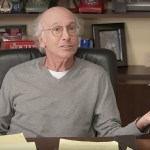 Larry David’s bringing back a pretty, pretty good show. ‘Curb Your Enthusiasm’ went off the air in 2011, and HBO just announced its return date — and brought us the first teaser.

The ninth season of Curb Your Enthusiasm is set to premiere on HBO on Oct. 1 — and fans are really excited. In the teaser released by the network, Larry David stands as a Greek God and while there’s no new footage, it’s impossible not to laugh. Plus, this is his new tagline: “I left, I did nothing, I returned.”

Larry David will return along with Susie Essman, Ted Danson, Mary Steenburgen, J.B. Smoove, Cheryl Hines and Jeff Garlin. Additionally Lauren Graham will be having an arc in the show. “It was fantastic… There really is no greater joy than actually making Larry David laugh. And he really laughs hard,” she told TVLine, adding Ted actually told her when she did her arc that since they were on cable, she could let loose, and “think of the craziest thing possible.”

"Curb Your Enthusiasm" Is Back!!!! pic.twitter.com/dya8uUlVPU

Larry told director David Steinberg in 2014 that he was aware of how much people were missing the show.  “I feel bad that I don’t have shows for them, and I haven’t given up the hope,” he said at TCA. The series ran for 80 episodes before it ended, so fans have  been waiting for years — and it’s time we got what we’ve been waiting for.