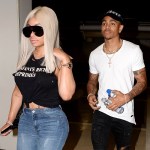 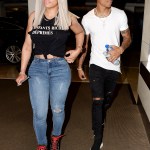 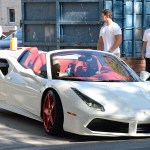 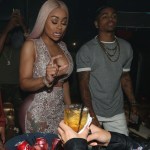 After Rob Kardashian accused Blac Chyna of sleeping with Rarri True in their own bed, he dropped another bombshell: there was a second dude. Learn a little about Mechie, the other man he claims got busy in his house!

1. He was an original member of 4EY The Future. Mechie or Mechie SoCrazy, real name Demetrius Harris, 24. was one-third of the R&B/pop/indie group 4EY The Future, alongside friends Kenny Iko and Leo Amari. The group sparked a major dance craze in 2015 with their hit song “Scoot Ova”. Tons of fans set out to recreate the high energy, fun dance that they saw in their music video and at their shows. Just take a look at all the “Scoot Ova” videos on YouTube and you’ll see what we mean! Hear all about the Rob and Blac drama in our podcast, here.

2. He’d like to be excluded from this narrative, please. Mechie isn’t amused that Rob Kardashian, 30, pulled him into his relationship drama, and addressed the situation simply. He neither confirmed nor denied that he slept with Blac Chyna, 28 — and in Rob’s bed, no less. But he did a short and sweet response on his own Instagram: “I am not here for these games”. Hear that loud and clear, Rob and Chyna?

3. …But he may still be taunting Rob Kardashian. That original post has since been deleted, now replaced by a curious video of Mechie singing along to the SZA song “The Weekend”. He captioned the Instagram video with: “Can I satisfy you for the weekend?” along with laughing emojis. The song’s about someone telling their SO that they’ll be their side piece on the weekend, even if they’re dedicated to their partner during the week. So yeah; it doesn’t seem like it’s a coincidence that he’s posting this video right now!

4. He was a Vine star. If you loved Vine before it sadly shut down, you might recognize Mechie. Most of the singer’s videos were dedicated to flaunting his killer dance moves and singing clips of his awesome songs.

5. He opened for Meek Mill. Mach’s now a solo artist, and he’s good enough to have opened for some amazing artists. He joined Meek Mill on his recent tour! His star power is continuing to rise — and he’s probably getting a publicity boost from being included in Rob’s major drama.

HollywoodLifers, do you think it was wrong that Rob called out Mechie on Instagram? Let us know!