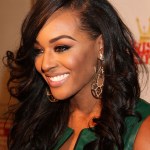 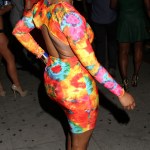 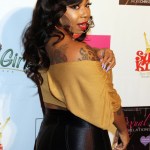 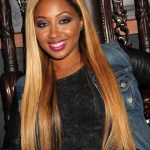 Brandi Maxiell will always treasure her experience on ‘Basketball Wives LA,’ but the reality star ‘regrets’ returning to the show. While speaking to us EXCLUSIVELY, she opened up about the struggle of coping with her grandmother’s death while filming.

Brandi Maxiell, 34, was noticeably missing from a few episodes of Basketball Wives LA, so fans were psyched when she returned to the hit VH1 reality show for the highly anticipated sixth season. While catching up with HollywoodLife.com EXCLUSIVELY, Brandi revealed why she had regrets about going back to film in the wake of a beloved family member’s death. “My experience returning to the show kind of was the worst experience of my life,” she admitted. “It was a little different for me. This time around, it was different with family. My grandmother had passed away in December.”

“It was kind of difficult for me,” Brandi added. “I didn’t what to do…if I wanted to come back or if I needed to come back. My grandmother is my life. It was difficult knowing they were going to start filming in December as well. When I decided to come back, it was in January, they were begging me to come back. The show was not going as they hoped and [they said] ‘we really need you back.’ I don’t know, I went and I regret going back.” It was even tougher when having awkwardness with her co-stars, since she didn’t expect it. “When I left off with the ladies, we were cool,” Brandi explained.

The reality star isn’t into bashing other women and she’s grateful to have worked with some of her favorite people on BW. “Me and Malaysia [Pargo] we’re best friends. We ride or die for each other, and we’re probably one of the realest friends on the show. It’s quite natural, we have each other’s back,” she noted, also addressing how she’s even formed a bond with Jackie [Christie] over the years, adding how she’s one of the most fun people to film with.

Brandi has been very open about her personal struggles, including her heartbreaking battle with ovarian cancer. “This season, I was going to come back and revisit that,” she noted. “I wanted to show a lighter side of me, so they could see my speaking engagements, going to the hospitals and more. I just lost my grandmother to cancer, so it’s something that I loved and am passionate about. It’s hard to do it on a show, because people are saying ‘enough already.’ But what else do you want to see? Me arguing with the women?” Even so, she still found the silver lining in her experience.
Tune in Monday at 9/8c on VH1 to watch Basketball Wives LA!

HollywoodLifers, did you love seeing Brandi on Basketball Wives? Tell us!