While it doesn’t seem like the Kardashian sisters will make amends with Caitlyn Jenner anytime soon, Cait did get to spend Father’s Day with Kylie & Kendall Jenner! Stepping out in LA, the 3 were all smiles as they bonded for the special occasion.

Despite receiving major shade from the Kardashian side of the family on June 18, it looks like Caitlyn Jenner, 67, still managed to have a happy Father’s Day — thanks to her daughters Kylie Jenner, 19, and Kendall Jenner, 21. The three ended up spending the morning together in Beverly Hills, where they braved their fans while walking along Rodeo Drive. Kendall even brought her adorable puppy along for the outing! But even cuter, Caitlyn looked BEYOND happy to be spending her Father’s Day with her daughters, and we don’t blame her!

Rocking flared jeans and a dusty-rose colored sweater with shoulder cutouts, the Olympic champion  looked both casual and stylish during her girls’ day out. Kendall, on the other hand looked amazing in a denim midi dress and white sneakers, while Kylie kept things simple in a black tee and striped pants. The threesome drew so much attention in fact, that they even stopped to pose for some fans’ photos as they strolled in the Cali sun. As HollywoodLife.com reported earlier, the Kardashian girls — especially Kim Kardashian, 36, will most likely NOT be seeing their former stepfather on Father’s Day. Why? They’re still angry over Cait’s bombshell memoir that — according to them — was unfair to Kris Jenner, 61.

“Caitlyn is hoping to enjoy a low key fathers’ day, at home with her kids. But, at this moment in time, there’s very little chance any of the Kardashian girls will be there with her to celebrate,” a Kardashian insider revealed to us EXCLUSIVELY. “All of them, but Kim especially, were really angry about her memoir, and think she painted Kris Jenner in an appalling light. Caitlyn’s tried reaching out to Kim a number of times, but she just isn’t interested right now.” 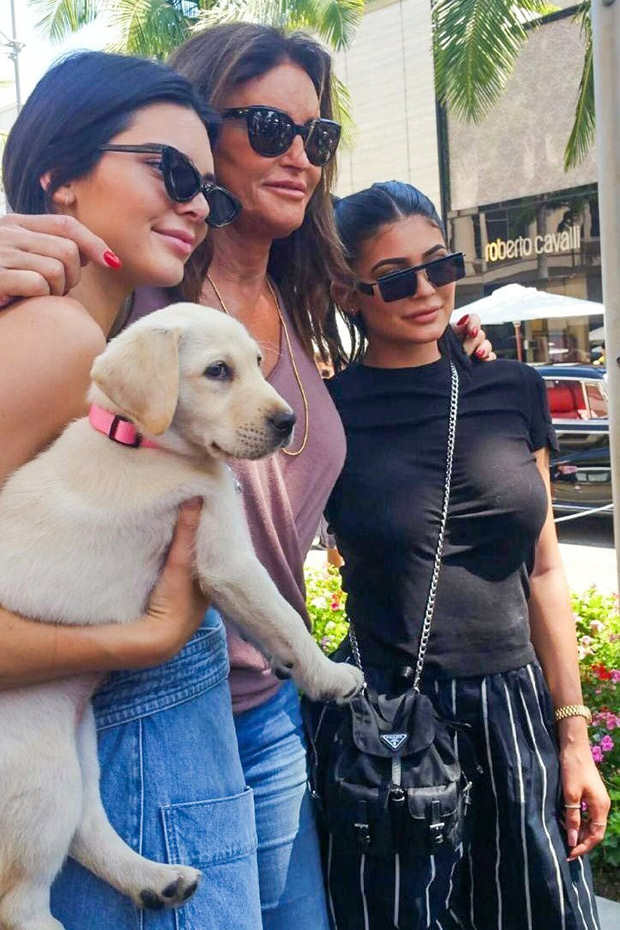 But Kardashians or not, Caitlyn is still determined to have a good Father’s Day. And aside from seeing Kylie and Kendall, she’s also going to meet up with her other kids: Brody Jenner, 33; Burt Jenner, 38; Brandon Jenner, 36; and Cassandra Marino, 37. “Brody, Burt, Brandon, and Casandra are definitely planning to see Caitlyn though, and she wants to have a nice, relaxed dinner with them at home,” our source added. Good for Caitlyn! Hopefully she and the Kardashians will work things out in the near future, but until then, at least Cait isn’t all alone this Father’s Day.

Tell us, HollywoodLifers — are you surprised Kylie and Kendall met up with their dad on Father’s Day?