Kylie Jenner, 19, has noticeably been dressing more casually lately, but for a girls’ night out on June 16, she totally stepped up her style game. For her dinner date with friends at Kardashian hot spot The Nice Guy, Kylie rocked a super sexy gold dress, which hugged her body perfectly and put her fabulous curves on full display. Because of the gown’s slinky straps, the reality star was forced to go braless, but as always, she pulled it off flawlessly! The ensemble featured a leg slit, too, which allowed Kylie to show off her legs, and trendy open-toed heels, embellished with a fur strap. Plus, she paired the glittering gold number with gold jewelry, including an ankle bracelet — does this mean they’re back in style now?!

To go with her over-the-top dinner look, Kylie kept her hair super casual, pulling her locks back into a high bun. Her makeup was also on the more low-key side, featuring gold shadow and a nude lip that went just right with the look. She was joined by her gal pals Jordyn Woods and Pia Mia for the night out, while her boyfriend, Travis Scott, 25, was nowhere in sight. The rapper has tour dates coming up in Europe next week, so unless Kylie joins him, they’ll be forced to spend some time apart throughout the next month or so. Distance doesn’t hurt sometimes, though!

The hot new couple was first linked back in April after they were caught holding hands at Coachella. The sighting came just one month after Kylie split from Tyga, 27, who she’d been dating on and off for years. Since then, things seem to really be heating up between the 19-year-old and her new man — most recently, they packed on the PDA during a trip to Miami! Oh, and they’ve even gotten matching butterfly tattoos together as a tribute to his song “Butterfly Effect.” It’s getting serious! 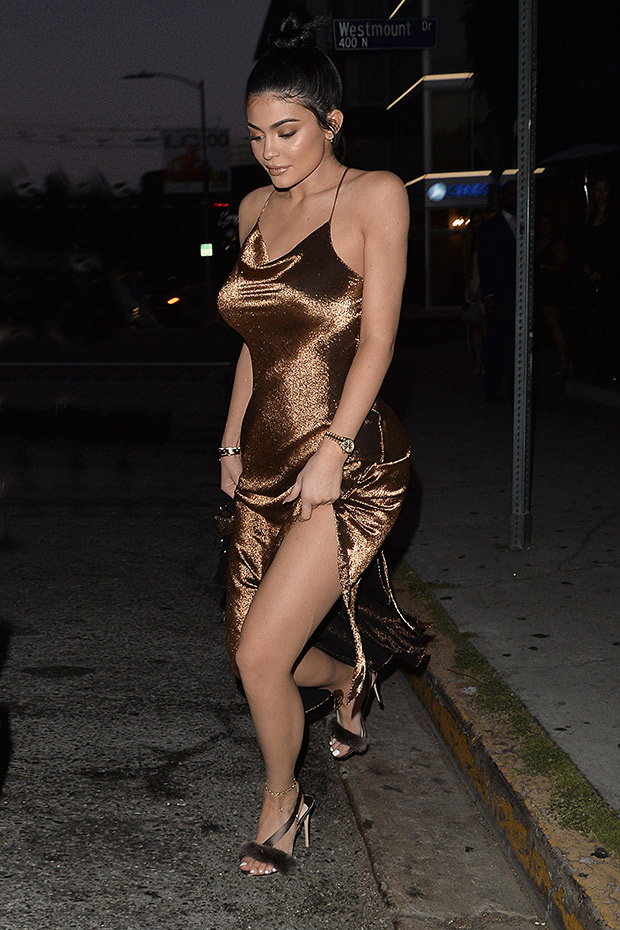 HollywoodLifers, what do you think of Kylie’s girls’ night look!?