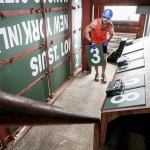 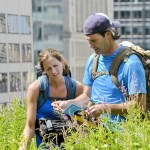 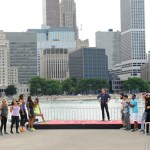 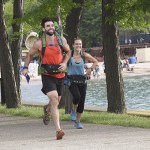 Who won it all? #TeamMomandDad, #TeamBrookeAndScott and #TeamLoLo battled it to the finish line on ‘The Amazing Race’ finale on June 1. So, who crossed the finish line first? (Spoilers ahead.)

Brooke Camhi, 36, and Scott Flanary, 34,; London Kaye, 27, and Logan Bauer, 27; and Tara Carr, 38, and Joey Covino, 46, all flew to Chicago, Illinois (in prestige class, I may add). Their first stop was Chicagoland Speedway, where they had two tasks — one team member had to change a tired in under :40, and then the other had to drive a lap in under :48 seconds. Somehow Joey changed the tire in :37 on his first try, while it took Brooke and London a a little bit more practice.

The next competition was to solve three riddles  about different landmarks in Chicago — at each one, teams would be given a postcard. All three teams stayed close in time, heading to multiple locations. Brooke and Scott led the pact, but their arguing got so intense at one point, that he begged her to jump on his back so they could go faster. She refused. However, they still delivered their postcards first, with both teams close behind.

Next up, the teams had to head to Wrigleyville Dogs to make hot dogs, then deliver them to fans overlooking Wrigley Field. Brooke and Scott kept their lead, and after delivering the dogs, they had to enter the park for their final challenge, which was all about communication and remembering what place your team came in in which city. While Brooke sat in the press box across the stadium with binoculars, she had to speak through a speaker to tell Scott which numbers to put where — and he couldn’t communicate back. However, she really kept her calm through it all, and they got it right on the first time!

They were actually through the entire board when Team Mom & Dad showed up; once Team Mom & Dad finished, then Team LoLo showed up. Brooke and Scott quickly found their final clue which led them to the FINISH LINE. Yes, they won first place — the team that bickered from day one. Team Mom and Dad came in second, with Team LoLo coming in third. All three teams stayed so happy and positive through the entire race, something that was definitely nice to see.

HollywoodLifers, are you happy with the winner?