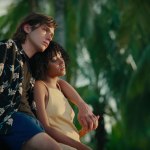 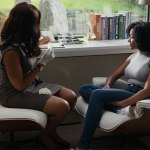 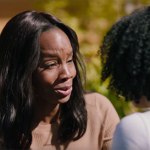 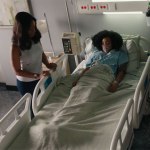 ‘Everything, Everything’ is changing the teen romance game. HollywoodLife.com talked EXCLUSIVELY with stars Amandla Stenberg and Nick Robinson, who play Maddy and Olly, about bringing Nicola Yoon’s powerful YA book about an interracial romance to life.

Everything, Everything, now in theaters everywhere, is making a lasting impression when it comes to diversity. The movie, based on Nicola Yoon’s YA novel of the same name, follows a teenager named Maddy (Amandla Stenberg), who is forced to stay inside her house because of an illness she’s had since birth. She ends up falling in love with the new neighbor, Olly (Nick Robinson), and they go to great lengths to be together. Everything, Everything is distinctive among the masses of teen romances because Maddy is biracial and Olly is white. Their interracial romance is genuine and reflects the millions of relationships in our world today. The movie doesn’t make race an issue for Maddy and Olly. In fact, race is never mentioned at all.

This movie is also one of the first young adult movies to feature a biracial female lead, with Maddy being half black and half white. HollywoodLife.com asked Amandla, 18, EXCLUSIVELY what taking on the role of Maddy Whittier meant to her and what she hopes Hollywood takes away from Everything, Everything. “I mean that’s kind of the reason why I did the film, because it was written by Nicola and was intentionally written for a biracial girl to play that character,” she told us at a special VIP screening of the movie on April 30. “I think that’s really special. We don’t actually get to witness that very often, and so seeing that diversity in this project I think can impact people widely. This movie is being widely distributed and marketed to a lot of teenagers, and so I think for a lot of girls to see themselves in the film and also for everyone to see this interracial couple in a way that’s not necessarily pointing it out or trying to make it an issue or a main problem in the storyline is really powerful.”

Nick, 22, added, “I really liked her [director Stella Meghie] vision for the project. It felt like a new take on a story we’ve seen before, especially with the interracial aspect. I liked that the script didn’t even highlight that at all. It wasn’t a conversation. It was just real.”

Before Everything, Everything became a movie, it was a book beloved by millions. Readers have fallen in love with Maddy and Olly’s love story. Over the course of the book and movie, Maddy and Olly have tons of memorable moments together. We asked Amandla and Nick which scene stood out among the rest for them. Amandla revealed she loved the “beach montage” scene the most, while Nick’s favorite scene is another crucial Maddy and Olly moment.

“I do like the scene where Olly and Maddy meet for the first time,” he said. “In the film, I think we do a good job of capturing the awkwardness of an online relationship and how it’s strange to meet in person regardless of the disease and all these other factors. It’s just a very sweet story.”

HollywoodLifers, are you going to go see Everything, Everything? Have you read the book? Let us know!