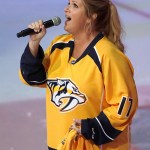 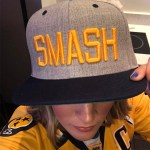 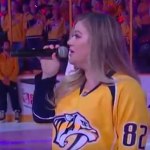 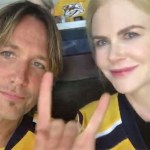 What a voice! Kelly Clarkson is the latest star to sing the National Anthem before a Nashville Predators NHL playoffs game. We’ve got the video of her incredible rendition on May 18, right here!

We really hope the Nashville Predators make it into the Stanley Cup finals because we are getting treated to so many superstars performing the National Anthem at their home stands. Game four of their Western Conference finals series against the Anaheim Ducks was held on their home ice in Bridgestone Arena and the place erupted when it was announced that Kelly Clarkson would be performing the Star-Spangled-Banner. Her rendition was so incredible thanks to her powerful voice and range, and she had the place completely mesmerized as she gave the patriotic performance.

The 35-year-old Nashville resident strode out onto the ice looking fantastic, wearing a Predators team jersey and black leggings. She wore her sandy blonde hair straightened and it’s just SO good to see her out and about again. She’s been so low profile over the last few years after having children back to back. The OG American Idol champ will be finally getting back to work in 2018 when she joins The Voice as a coach, and we’re really hoping she puts out a new album soon because it’s been two long years since Piece by Piece came out.

.@kelly_clarkson brought down the house with this National Anthem! #StanleyCup pic.twitter.com/SIQCHeAzho

Since Nashville is Music City, the Predators have a slew of country stars to choose from when it comes to singing the National Anthem before their playoff games. Carrie Underwood, 34, did the honors during a first round game where she even wore the jersey with her husband Mike Fisher‘s number on it, as he’s the Pred’s team captain. For game three against the Ducks on May 16, Keith Urban, 49, got the nod to sing the anthem. He noted that even though he’s lived in the U.S. for over 25 years, it’s the first time he’d ever been asked to sing Old Glory before a sporting event!

If the Predators make it past the Anaheim Ducks and into the Stanley Cup finals for the very first time, we can’t wait to see what other stars will be gracing the ice to sing the National Anthem before their home games! Just the celebrity fan turnout alone has been so fun to watch, with the likes of Luke Bryan, 40, Dierks Bentley, 41, and the members of Lady Antebellum all showing up to give support to the team!

HollywoodLifers, what did you think of Kelly’s rendition of the National Anthem? Do you think she’ll be a great judge on The Voice?