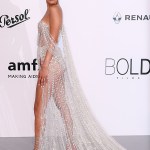 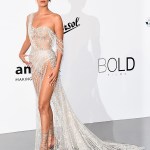 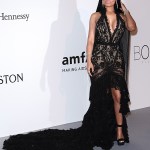 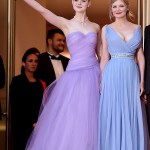 Age is but a number, especially to Susan Sarandon, 70, who appears she is aging backwards, especially in her ultra-sexy Cannes Film Festival gown! Showing off serious cleavage and a ton of leg, the actress had jaws on the floor with her amazing look!

Susan Sarandon, 70, absolutely stole the show at the Cannes Film Festival Opening Ceremony in a stunning dark green velvet gown. From her eye-popping cleavage to the super-high slit in the gown, Susan showed off her pristine physique and totally upstaged the young blood on the carpet. Not a wrinkle or a sun spot to be seen, the actress was absolutely flawless and ageless! Susan’s dress was long-sleeve but off-the-shoulder, and exposed her skin and cleavage before going into a curve-hugging corset. We’re loving this look and apparently everyone else was, too! The Feud actress was captured having convos and love sessions on the carpet with a number of celebs. She was literally the star of the show!

One of our favorite moments, though, was when Susan walked the carpet with fellow gorgeous red head Julianne Moore! Julianne, who was in a high-neck, decorative red gown, beamed posing with Susan and giggling with her. Adorable! Susan also had a total love fest with 3 Generations co-star, Elle Fanning, 19. The duo hugged and kissed, sharing a special moment in their gorgeous looks! Elle was a literal princess in a huge silk ballgown with intricate designs on the long train. Both of these ladies were having serious fashion moments. Susan kept it so cool, leaving her blacked-out sunnies on throughout the carpet.

Speaking of fashion moments, Susan was super stylish upon her arrival in Cannes, rocking chic metallic sneakers, an all-black ensemble topped with a long white coat. The film festival, which is celebrating its 70th anniversary, will feature 49 films from 29 different countries, including a new project from Sofia Coppola.

HollywoodLifers, what do you think of Susan Sarandon’s super hot look!? Let us know!