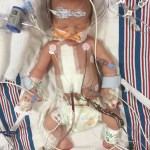 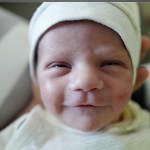 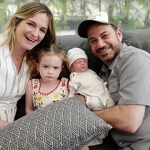 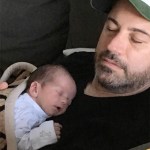 Aw, Jimmy Kimmel is a proud new dad and he doesn’t care who knows it! Showing off his 4th kid — 2nd with wife Molly McNearney — the comedian couldn’t help gushing about his son, and we totally don’t blame him! After all, the infant had open heart surgery just 3 days after birth.

The newest addition to the Kimmel fam could not be any cuter! Jimmy Kimmel‘s, 49, wife, Molly McNearney, 39, gave birth on April 21, and the star shared the newborn’s adorableness with the world on May 1 via a YouTube video. In the same vid, the comedian revealed his baby boy, William “Billy” Kimmel, had open heart surgery just three days after he was born. Thankfully, the newborn is doing just fine now, and he is one precious kid! It’s easy to see why Jimmy was so psyched to show off his little one. Watch the video below!

In the 15-minute-long clip, Jimmy told his audience during his late night talkshow the story of Billy’s birth — including how he was born with a “hole in the wall of the left and right side of his heart.” Luckily though, the baby’s emergency open-heart surgery was a success. He will however need two more surgeries down the line, the next one in just a few months.

“He appeared a normal healthy baby,” Jimmy said. “A very attentive nurse at Cedars-Sinai heard a murmur in his heart and noticed he was a bit purple, which is not common. [The doctors] determined he wasn’t getting enough oxygen in his blood, either in his heart or lungs. They did an x-ray and his lungs were fine, which meant his heart wasn’t. It’s a terrifying thing.”

In addition to this little cutie, Jimmy and Molly are also proud parents to daughter Jane Kimmel, 2, while Jimmy shares two kids with ex-wife Gina Kimmel, 52, as well. He and Gina have Katie Kimmel, who’s in her 20s, and Kevin Kimmel, 23. Jimmy and Molly announced they were expecting their second child together in December with Jimmy revealing the exciting news on his talkshow Jimmy Kimmel Live!

And while the comedian clearly loves fatherhood, he’s not one to pass up a good bit. In fact, just last year in May, Jimmy shared on his show how baby Jane ruined Mother’s Day — and made him and Molly wish they had no kids at all! But of course it was all a joke. “It turns out the only bad thing about Mother’s Day is having children,” Jimmy told his audience as a picture of his wife consoling their baby girl flashed across the screen.

“Jane decided to celebrate Mother’s Day by making my wife wish she had no kids. [Jane] wouldn’t eat. She wouldn’t sit still. She had no crayons. They had no high chairs.” The funnyman continued, “Look at my wife’s face. She did not let us relax for one second.” And now the two will REALLY have their hands full with two little ones under the age of three! But with a face like that, a parent can’t stay mad for too long.

Tell us, HollywoodLifers — isn’t Jimmy’s newest addition precious? Do you think the child looks more like Jimmy or Molly?