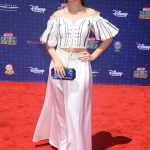 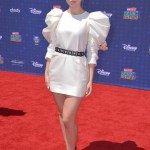 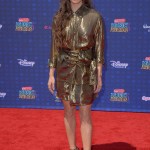 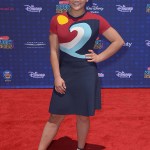 Dove Cameron has arrived, people! The ‘Descendants 2’ star stepped out onto the Radio Disney Music Awards red carpet looking like a true queen in a white mini dress with puffy sleeves.

Dove Cameron, 21, looked beyond fierce on the red carpet at the Radio Disney Music Awards on April 29. She was the epitome of glamour in a short white mini dress with puffy sleeves and a black belt. The Descendants 2 star definitely went for an 80s glam look.

Her platinum blonde hair was pulled tightly back into a bun, and she was totally rocking the no-makeup makeup look. Her beautiful green eyes popped with her RMDAs ensemble. Dove accessorized her outfit with one dangling gold earring. She’s so trendy!

Dove and her Descendants 2 co-stars Sofia Carson, 24, Cameron Boyce, 17, and Booboo Stewart, 23, will be on hand to reveal the first trailer for the highly-anticipated sequel during the show. Sofia is also serving as one of the hosts of the show, which will air on Disney Channel April 30. The four VKS will then perform a medley of “Rotten to the Core” and “Ways to be Wicked” on the May 1 episode of Dancing With the Stars! The sequel will premiere on July 21.

Dove has had a very busy year. In addition to filming Descendants 2, she also stole the show as Amber von Tussle in NBC’s Hairspray Live! in Dec. 2016. Her Disney Channel show Liv & Maddie came to an end after four incredible seasons in March 2016. Dove is definitely destined for great things.

She recently revealed in an interview with Teen Vogue that she’s currently working on new music that’s got a pop vibe, but with an edge. We can’t wait to see all the things Dove has in store for us!

HollywoodLifers, what did you think of Dove’s outfit at RDMAs? Let us know!