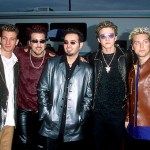 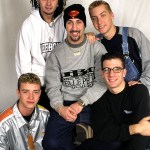 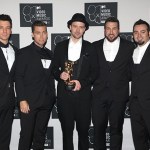 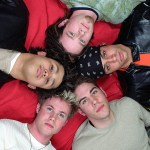 Look who’s back! It’s been 16 years since O-Town dropped their debut album, so they’ve learned a lot. The band — now a foursome — sat down with HollywoodLife.com to talk all about their new sound, their ex-bandmate, their late manager Lou Pearlman, and yes, pelvic thrusts.

O-Town just dropped their first single off their upcoming EP, but “Empty Space” is just the beginning. This is the first time they’re releasing music completely independent from a record label, and things are changing a bit. HollywoodLife.com sat down with the guys — Jacob Underwood, Trevor Penick, Dan Miller and Erik-Michael Estrada to find out everything you wanted to know.

How does this music compare to past O-Town music?

Dan: This music’s from us. The majority of Lines & Circles was written or cowritten by us in some way, and some form, but this one, from the very inception, everything pretty much goes through the O-Town filter — every word, every sound design.
Jacob: This was a lot more intense in the production side for us personally. I think it’s the next step of Lines & Circles — I love that album, and I feel like this is like the big brother or the next graduated step of that. I think we found our bearings again on Lines & Circles and then refined them for the new EP. We don’t have a ballad on this EP.
Erik: We also went on tour for a while with Lines & Circles, so we kind of figured out who we were. I think a big thing with Lines & Circles was that we were attempting it for the first time as four, and we were sort of discovering ourselves along the way. This one, we knew who we were — what our live show consisted of, what we wanted to bring to it.

So, what’s the dynamic and differences now, with four?

Jacob: We’re always on time now. Lines & Circles was kinda like the transitional period — like, how is this gonna be without Ashley? We found our way, we found a sound, the stage show, it all kind of happened. Now it would be weirder to have him in it, than to have him not in it. We have a different dynamic.
Trevor: We have more swag. Just by looking at us — it’s not anything against him! He’s just blond hair, blue eyes, and he looks cheesy! He just does. I’ll tell him to his face, I’ve said this to him before.
Jacob: It also doesn’t suck not having to split your money five ways!
Trevor: Or vocal parts. I get to sing now too.
Jacob: One of the things that happened, is when we got together to do this, we were all in our mid thirties. We all had to sort of decide, okay we all have to sacrifice [things] to do this because we know that there’s something here. It would have been miserable to be involved with someone who didn’t want to do it as much as we did. It took a lot of coaxing to get certain members (motions at Dan) back in, but that was because there was a lot of doubt. The fans came out, and the fans can see we are really genuine and really sincere about how we feel about them.

This next album is broken into two EPs — what kind of sound can we expect? Any themes in the lyrics?

Dan:  I was really caught up with not singing songs about love and girls and clubs, because it didn’t really fit. I’m in a different space than these guys. It took a lot of coaxing [for me]. It wasn’t just because I was nervous, it’s because it came just went i had a second child, and Iw as going to have to leave for along periods of time. So yeah, I’ happy we’re doing this independently, our way; we don’t have to worry about appeasing anyone else. I felt like it was important to make that known in the music, too.

So, no songs about love?

Dan: Empty Space, on first listen, sounds like it’s about a girl, but I actually wrote it about the band, and what it was like when the band split up. That’s what I was thinking about — there was this hole in my life that wasn’t there anymore. Even though it was about independence, I try to give all the songs different meanings.
Jacob: I left a convention and wrote a song called “Shady Business.” It was a lot of about Lou [Pearlman] too, but it was things going on in our lives that people can relate to. Everybody’s gonna make the parallels to Lou, but everyone has been taken advantage of by someone, we’ve all dealt with shady people… It’s unfortunate because Lou is known for starting the bands, and for screwing people over to a certain degree, but we have this conflicting feeling. When he passed away, you sort of feel torn. It happened while we were at MY2K in Kansas City. We filmed the movie, Dead 7, and that sort of broghtus all together. When Lou passed, within two minutes, I was on FaceTime with AJ [McLean] & Joey [Fatone]. Everyone felt the impact all at once. The story was fresh because Lou had just died. It falls in line with our narrative — we’re not young, dumb, falling blindly in love anymore.
Trevor: Well, some of us are really trying and searching.

Ok, so we know about the new stuff — you’re still performing your old hits, right?

Dan: Oh yeah! We realized pretty early on, people are there for the nostalgia. There’s nothing like that moment we start “All or Nothing” and “Liquid Dreams.”
Erik: Honestly, I didn’t like that song. “Liquid Dreams” & “All or Nothing” were the first two songs we heard when we were signed to Clive. I heard “Liquid Dreams,” and I looked at Jacob, and we thought it was way too novelty
Trevor: It sounded like an LFO song!
Dan: There were songs we hated even more, we ended up putting into the set because the fans loved them — like “Shy Girl!”
Erik: However, we’ve been able to take some of them and put them into our VIP soundcheck. We basically do a full set acoustic for our VIPs, do a photo op and a selfie line.

Did you ask anyone for advice on going independent?

Jacob: New Kids on the Block. When we did that show, I did ask them advice. They know exactly what their brand is — they do it independently, they have solo careers, and they’re still in the band. They set the precedent, they’re the originals.
Dan: 15 years ago, every single song we did, had a pelvic thrust in the choreography. We got to the point where we’re like, “No more, it’s cheesy.” Then we saw NKOTB this Summer, and they were like doing it for minutes at a time, like 27 pumps in a row. It’s a whole bit, but as weird as it is, that’s what their fans want too see! Now, we haven’t gone that far — we don’t have any long pelvic thrusts, but they just know what their fans want. And it works.
Erik: However, we have always been the younger brother to all the bigger boybands, so there has always been a certain little chip on our shoulder. Like hey, we were the last ones out, but we were chosen from all over the country. We were, at that point, the most talented people to be in the band. We always had that feeling of that team that never won that championship game. We’ve always gotten to the playoffs but never sealed the deal. I definitely hold the biggest chip.
Jacob: We know we’ll never sell the most records, but I want us to be the best on stage. I want people to come and see us and leave saying “They’re the best.”

O-Town is currently touring all over the US, and in September, they’ll join two stops on the I Love The ’90s tour! You can get more details on their website.