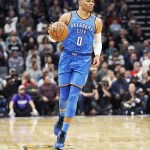 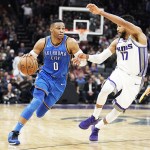 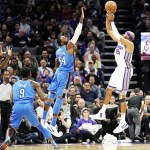 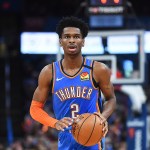 It’s go time as the NBA playoffs have arrived and we’re getting treated to a great first round Western Conference match-up. James Harden and his Houston Rockets are taking on Russell Westbrook and the Oklahoma City Thunder and we’ve got your way to watch via live stream at 9pm EST on Apr, 16.

What more could we ask for than the NBA’s two leading MVP candidates going head to head in the playoffs? James Harden, 27, has been making his case with solid leadership of the Houston Rockets until Russell Westbrook, 28, broke the all-time season triple-double record and led the league in scoring. Both of these superstars are going to be fighting hard to prove their case as to why they are the league’s most valuable player when game one of their playoff series gets underway Apr. 16. Scroll down for the live stream details on how you can watch.

Russell has to be the sentimental favorite in this series, after be broke Oscar Robinson‘s 55 year record of 41 triple-doubles. The Thunder are 33-9 when the star achieves that feat, so the team’s fortunes will be on him once again. For the first time he’s going to be leading the squad into playoffs minus Kevin Durant, 28, who left the team in the 2016 off season after eight years for a better shot at an NBA championship with the Golden State Warriors.

The Thunder will need to be on their toes when it comes to defense, as Houston blasted its previous NBA record of taking 40 three pointers on average per game and have the league’s best percentage of successful field goal attempts. If they have any open shot, they will go for it so OKC has an unenviable task on their hands. James takes every game so seriously, and the playoff are no different. “Honestly, every time I step on the court, I feel I’ve got something to prove,” the Bearded One said. “There’s no difference (in the playoffs). Obviously the intensity is going to be…a lot higher. But for me, nothing changes. Go out there, be focused, and ready to go out there and hoop.”

The first game of the Houston Rockets Vs. Oklahoma City Thunder playoff round tips off at 9pm EST on Apr. 16. You can catch the game online on TNT via your cable provider by CLICKING HERE TO WATCH.

HollywoodLifers, who are you rooting for to take the series, the Rockets or the Thunder?