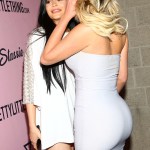 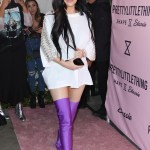 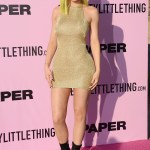 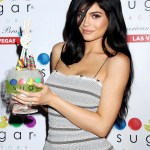 Get it, girl! As soon as Kylie Jenner arrived to Coachella she became the ‘belle of the ball,’ and we’ve EXCLUSIVELY learned that she’s constantly ‘getting hit on!’ The reality star is having a blast ‘playing the field’ after her rumored split with Tyga.

Kylie Jenner, 19, rocked a sexy skin-tight gold dress on the first day of Coachella on April 14, ensuring that she would send hearts racing! Even though the reality star is reportedly back on the market, her admirers wasted no time spitting game at her. “Kylie is having the time of her life and her sisters are telling her ‘I told ya so,'” a source tells HollywoodLife.com EXCLUSIVELY. “Ever since she’s developed into this stunning babe, Kim [Kardashian], Khloe [Kardashian], Kourtney [Kardashian] and Kendall [Jenner] have all been telling her she’s been missing out by keeping herself on lock down with Tyga.” The rapper also surprisingly made an appearance at Coachella!

“Now, she feels like she knows what they meant,” our source continued. “She is absolutely the belle of the ball at Coachella. She’s been hit on by models, celebrities, athletes, and musicians. She loves that she is playing the field.” Kylie arrived to Coachella Valley via private jet, and she took to Instagram on April 14 to share a photo of herself venturing to the star-studded music festival. However, noticeably absent was her former flame Tyga, who arrived to the location without his famous ex. The reality star was still all smiles, partying with her BFF Jordyn Woods.

As we previously reported, “Kylie is super excited to see Travis Scott at Coachella this weekend, but she became nervous and terrified when she found out Tyga was going too,” a source told HollywoodLife.com EXCLUSIVELY. “Kylie and Tyga’s breakup is still fresh and many of the feelings are still raw,” continued the source. “Bumping into Tyga would still be uncomfortable and awkward for Kylie especially if she is sitting on the lap of another rapper at a party.” My, oh my!

Kendall was all smiles when she was spotted leaving Travis’s concert on April 14. Kylie sparked romance rumors with the rapper, 24, when she was spotted cozying up to him on April 11. Ky and Travis were reportedly spotted together at an industry party for the website PrettyLittleThings.com. However, we’re sure she’ll enjoy the single life — at least for a bit!

HollywoodLifers, are you glad to see Kylie living it up at Coachella? Tell us!