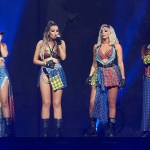 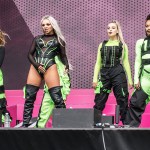 Relax, Little Mix fans! Perrie Edwards, Jesy Nelson, and Leigh-Anne Pinnock proved they’re all still BFFs and goofed off on the Miami beach after recent split rumors. The ladies had fun in the surf to help Jesy get over her breakup in cute pics you have to see!

Little Mix just completely shut down any rumors of trouble in the group. The girls walked hand-in-hand on the beach in Miami like the BFFs they are. Perrie Edwards, 23, Jesy Nelson, 25, and Leigh-Anne Pinnock, 25, hung out together and had blast. The girls laughed and goofed in the sand. Perrie and Jesy rocked high-waisted denim cut-off shorts and Calvin Klein bikini tops, while Leigh-Anne showed off her figure in a black bandeau bikini.

Little Mix have had to squash annoying rumors of fighting between them in the past too. Perrie and Jesy shared a Snapchat in Mar. just show how close they actually are and prove speculation of a feud was beyond silly. “So we’d just like to address the situation of the friendship between me and Perrie,” Jesy said, “Do you think I’d be laying in her bed if I weren’t friends with her?!” she joked. The video showed that there was absolutely no bad blood between Perrie and Jesy. Thank goodness!

The girls totally proved they are an united front and hopefully their fun beach day was the perfect distraction for Jesy. She just broke-up with her boyfriend Chris Clark, 22, from the UK reality show The Only Way Is Essex. “Jesy’s life is a world away from his. She’s a superstar, traveling the world and living in the spotlight. He got a taste of her lifestyle and it couldn’t work — it’s just not him. There’s no bad blood it just wasn’t working out between them,” a source previously told The Mirror.

HollywoodLifers, are you relieved to see everything’s okay with Little Mix? Tell us in the comments below!