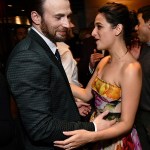 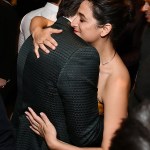 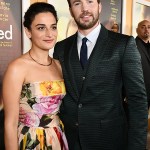 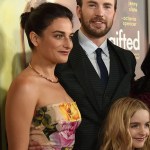 Exes, Chris Evans and Jenny Slate turned heads at the LA premiere of their drama film, ‘Gifted’ on April 4, when they shared some unexpected PDA! The former lovers looked happier than ever when they couldn’t stop smiling, while they hugged it out! You have to see the adorable pics!

If that’s not a look of love, then we don’t know what is! Chris Evans, 35, and Jenny Slate, 35, proved that they could be the most amicable of exes at the LA premiere of their film, Gifted, on April 4! The exes, who just split in Feb. 2017, were all smiles, despite Jenny’s March 2017 admission, that they “threw down pretty hard” during their breakup. But, after seeing their body language at the premiere, it’s evident that the smoke settled long before they hit the red carpet.

Chris and Jenny even gushed about each other on the red carpet! “He’s just an absolutely, really giving performer and a wonderful actor,” Jenny proudly told Entertainment Tonight about her co-star and ex-boyfriend. “It’s a delight, a total delight.” Amazing!

Then when the site caught up with Chris before the premiere, he said “It will be great,” about seeing Jenny later that night. “She’s the best,” he continued. We’re so glad to see that these two can be great friends after their split.

Chris and Jenny dated for less than one year before they called it quits in Feb. 2017. Their relationship was confirmed in May 2016, just days after it was revealed that she had ended her three-year marriage to Dean Fleischer-Camp.

In a March 2017 interview, Jenny revealed what ultimately let to the demise of her relationship with Chris. “We’re really, really different,” she explained to Vulture. “Chris is a very, very famous person. For him to go to a restaurant is totally different than for me to go. I sit in my window and I say ‘Hi’ to people on the street. I have more freedom because I’m not Captain America. I’m mostly a cartoon.” Jenny elaborated more on their split when she divulged that fame status played a role in their breakup. “This is what I needed to do to feel normal,” she said. “To be alone.” Awe.

HollywoodLifers, do you think Jenny and Chris will ever get back together?