We’re one step closer to the 2017 NCAA championship! On April 1, it’s Gonzaga Vs. South Carolina, and Oregon Vs. North Carolina and we are pumped! Before the excitement starts, we have your ultimate guide to the games. Check out the times, info and players to watch in the Final Four!

On April 1, we will find out the final two teams who will advance on to play for the NCAA championship. But first, Gonzaga will take on South Carolina on at 6:09 PM ET, followed by Oregon Vs North Carolina at 8:39 PM ET. And, before the games tonight, don’t forget to cast your votes on the final four teams, right here!

Now that we’re down to the final four teams in the tournament, we’re going to fill you in on some star players you should definitely keep your eyes on. But, we do need to point out that you won’t see any freshman in tonight’s lineup, aka the NBA’s draft prospects, like Lonzo Ball and Markelle Fultz.

First up, Nigel Williams-Goss. He is Washington’s leading scorer and an effective player on the court. And, you should expect him to be shooting the ball like a maniac tonight against South Carolina.

Johnathan Williams is definitely a key player for Gonzaga. He’s a versatile player when it comes to offense and defense. At 6’9″, he’s a defensive powerhouse, with a high percentage of blocks and rebounds. He’s definitely made the NCAA tournament his time to shine.

Now, we have Sindarius Thornwell, 22. There’s no other way to put it… this kid is a star. In this year’s NCAA tournament, he’s averaging 25.8 points,  7.5 rebounds, 2.8 triples, 2.5 assists, 2.0 steals and 1.0 blocks per game, via Bleacher Report. He’s exactly what Gonzaga needs because he’s consistent. This kid does not fail under pressure, which will be key tonight. Expect a bombshell performance from Thornwell tonight.

PJ Dozier, 20, a phenomenal guard, hailing in a 6’6″, is a breakout star for SC. With an incredible duo like Dozier and Thornwell, SC could be unstoppable.

Tyler Dorsey. That is all. But seriously, does this kid even need an introduction? After only two seasons with the Ducks, Dorsey, 21, has been a true success story. The 6’4″ sophomore guard is a shooting machine, and as long as he’s on point tonight, Oregon has a pretty damn good chance at advancing to the championship.

Another player to watch for the Ducks is Jordan Bell, 19. He’s a hero under the rim, as Oregon’s leading rebounder during the regular season. And, if all goes as planned tonight, you should expect him to be getting his hands on every offensive rebound. Also, keep your eyes on Dillon Brooks, 21; He’s has a pretty impressive NCAA performance thus far.

Let’s talk about Joel Berry. After suffering an ankle injury that could’ve put him on the bench for 2017’s March Madness, he’s been playing like he’s got two strong ankles. What injury? Although his shooting average has taken a hit, Berry’s not lacking in other places. His ability to take the ball where it needs to go and drive to the rim is definitely on point. His passion and drive will get the Tar Heels where they need to go tonight, for sure. And, don’t forget about Kennedy Meeks, 22, aka, the rebounding king, and Justin Jackson, 22, who leads the Tar Heels in scoring.

Be sure to check get your HollywoodLife updated bracket, below! 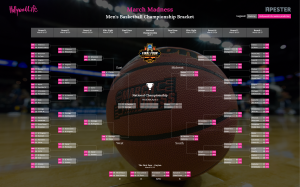 HollywoodLifers, who do you think will take it all?!