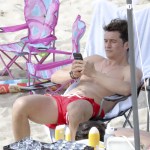 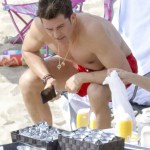 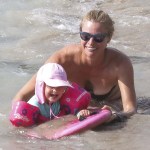 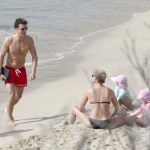 It’s been less than a month since his breakup from Katy Perry and Orlando Bloom certainly doesn’t seem to be brooding! Instead, the actor is living it up in St. Barts, and looked totally at ease while hitting the beach on March 23….shirtless, of course!

There’s no naked paddleboarding for Orlando Bloom, 40, on this vacation, but he certainly looks to be having a grand time, regardless. The 40-year-old is fresh off his breakup from Katy Perry, 32, and is dulling the heartbreak with some fun in the sun in the Caribbean with Australian model, Kristy Hinze-Clark. Orly went shirtless in a red bathing suit while on the beach in St. Barts March 23, while Kristy, whose kids were also there, flaunted her fab figure in a black bikini.

Don’t go getting any ideas that the actor is moving on romantically with Kristy, though — she’s been happily married to Jim Clark, 72, since 2009, and he’s reportedly also in St. Barts with the family, although he was not photographed during the beach trip.

It’s great to see Orlando looking so relaxed and seemingly having such a good time, as we know the aftermath of ending his nearly year-long relationship with Katy couldn’t have been easy. The pair broke up suddenly and unexpectedly at the end of February, just two days after they went to a post-Oscars party together, but were reportedly still talking and texting in the weeks following the split, giving fans hope that they might get back together someday.

However, Katy has been incredibly busy promoting her new music throughout March, so the timing simply has not been right for a reconciliation. Interestingly, it’s actually another one of her former relationships that’s been in the spotlight this week, as John Mayer recently dished on their breakup and writing song about her afterward. He even admitted to crying while writing the breakup album — whoa!

HollywoodLifers, do you think Orlando has totally moved on from Katy?