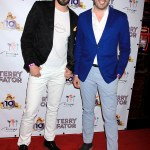 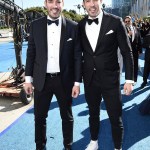 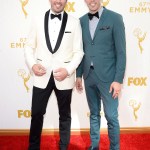 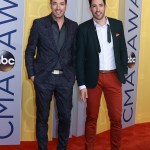 Love is in the air! HollywoodLife.com EXCLUSIVELY spoke with Jonathan, who filled us in on Drew’s ‘destination wedding,’ and if he’s ready to take the next step! And — remember their country single? Well, don’t be surprised if you hear some epic collaborations soon! …

“For the first time in history, all of the Scott brothers are off the market,” Jonathan Scott, 38, said when HollywoodLife.com EXCLUSIVELY spoke to the HGTV star. Jonathan is happily in a relationship with producer, Jacinta Kuznetsov, and “it’s been great,” he gushed! “It’s hard — with the chaotic lives we live — to think that we could even find a moment to find the right person, but it’s been exciting.” Awe!

Although Jonathan’s only been dating Jacinta for about a year, we had to ask if there would be an engagement in the near future? “Drew [38] and Linda [Phan] are giving me the look.. [to get married],” he admitted. “Definitely in the future… It may be a little creepy if I throw a ring on it [now], but we are definitely a fantastic match. It’s really good to have somebody at the end of the the day, that no matter what, they’ve got your back and they inspire you.” Adorable!

Well, speaking of weddings, his brother Drew has one coming up, aka his own!  Drew popped the question to Linda in Toronto in Dec. 2016, after six years of dating and Jonathan dished all of the nuptials details to us! “They’re planning to get married later this year or early next year,” he said. “They want to do a destination wedding, so maybe we’ll go back to our Scottish roots to go to a castle in Scotland or something. We’re waiting to see on that.”

In case you didn’t know, the Scott twins have another brother, J.D. So, could that create a few issues for the best man pool? Well, it turns out, “Drew has not confirmed if I will be the best man or not,” Jonathan said while laughing. He did admit that he may have a leg up on the competition since Drew was the best man during his first marriage years and years ago. If not, Jonathan will just give Drew a hard time like he always does. LOL.

The most important wedding detail of all? — Jonathan said he might write a song just for the ceremony! “Maybe a rendition of ‘Just The Two Of Us,’ but all about Drew and Linda.” Ha!

Yes, you read right — The Scott brothers not only transform homes into works of art, but they can sing too! In fact, they wrote and recorded two country songs [“Hold On” and “Let The Light Shine”] in 2016, for what started out as a fun project for their hit shows, Property Brothers: At Home on the Ranch. But, when they topped the Billboard charts and reached number one on Vevo, Jonathan said it was so “unexpected,” since it was a “natural” thing for them.

Jonathan even revealed that an album is not out out of the question for the multi-talented brothers. In fact, they’re currently in Nashville filming, and they’re actually squeezing in some valuable music time. “While we’re there we’re going to write more music and collaborate with friends. I wouldn’t be surprised if you see more stuff coming out,” he teased. But, don’t grab your tissues yet; the Scott brothers have no plans on leaving their first love of design and contracting. “It’s definitely not going to be that we’re going to give up our [TV] shows and tour with Justin Bieber [23],” he joked. Phew!

However, music collaborations between the Scott brothers and some of your favorite artists are on the horizon. While Jonathan wouldn’t tell us who he and Drew will be collaborating with he did admit that they have had some “pretty exciting offers. He even teased that “it’s amazing how many country music stars are actually huge fans of ours.”

Right now, Jonathan has a lot on his plate: He’s got Brother Vs Brother, a memoir with Drew that they are in process of writing [slated for Sept. 2017], their furniture line; Scott Living, AND his epic partnership with Stearns & Foster, which we’re obsessed with!

Jonathan teamed up with the brand bedroom brand to launch a stunning design plan, to show YOU guys how to create the most tranquil and relaxing bedroom atmosphere for every season. And, as we get spring started and head into summer, Jonathan is here to “provide a resource for anyone who has trouble in the bedroom.” Before you get the wrong idea, he’s talking DESIGN!

“I’m trying to find a way for people to get a better sleep and I’ve broken it down into two ways — a great mattress and a tranquil mood and tone,” he said. So, here’s three quick, creative and easy tips from Jonathan on how to transform your master bedroom!

Colors: Summer and spring means a fresh start, so colors are exciting! Jonathan said some of his favorites are yellows, blues and greens. “I do everything in a beautiful muted tone that feels upscale; layer it in with different patterns to create a more sophisticated design.”

Where to put color: If you have a favorite color, it’s not wise to splash it on an entire wall. This causes it go get alarming, which will ruin your “tranquil state.” But the key is to introduce little pops of color; you can have it in a bout 2-3 different areas; maybe pink flowers or pillows if that’s your favorite.

You don’t need to break your bank: “You shouldn’t have to change your furniture each season; you should only have to change the soft surfaces,” Jonathan said — such as, pillows, drapes, and small pieces.

HollywoodLifers, who do YOU think the Scott brothers should collaborate with musically? Tell us below!