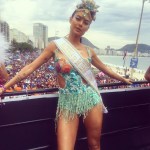 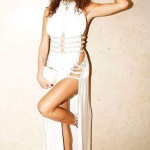 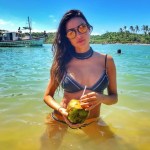 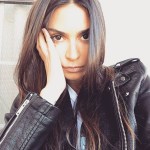 Mystery solved! Multiple Brazilian publications have confirmed that the gorgeous brunette seen leaving an LA party with Orlando Bloom is none other than Brazilian actress and model Thaila Ayala! Learn more about the A-lister right here!

1. She’s been acting since she was 14 years old

Thaila Ayala, 30, is an incredibly hard worker, and has acted since she was a young teenager to support her mother. Thaila was the star of Brazilian teen soap opera Malhação (Young Hearts), Caminho das Índias (India: A Love Story), Ti Ti Ti (The Buzz), Cheias de Charme (Sparkling Girls), Mais Forte que o Mundo: A História de José Aldo, and so many others. She’s starring in the live action Woody Woodpecker movie, which starts filming in Canada in 2017.

It’s no surprise that someone as gorgeous as Thaila is also a model! The talented actress, who was spotted leaving a party with Orlando Bloom in LA on March 16, according to Brazilian site Globo, has modeled for magazines and books, shot by famous photographers like Terry Richardson. She modeled for his book “Rio, Wonderful Town” in 2007, which was released that same year. That book featured one photo that revealed one bare breast. She’s also appeared in commercials!

Part of her modeling career has involved nude shoots! Thaila posed nude for the Brazilian magazine Trip in 2016. Thaila said in a 2011 interview with Gente that posing nude was like “rape”; she turned down an offer to pose nude for Playboy because of that discomfort.

4. She’s been married before

Thaila married Brazilian actor Paulo Vilhena in 2011. They divorced in 2013.

Don’t we all? Thaila’s Instagram account is loaded with tons of sexy photos from her many trips to Carnival in Rio de Janeiro, where she’s dressed up in elaborate, skimpy outfits. Just check out the pic above! Wings, rhinestones, and bikinis, oh my!

HollywoodLifers, did you learn something new about Thaila? Do you think she and Orlando Bloom are dating? Tell us in the comments!