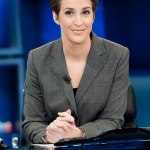 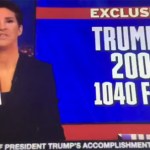 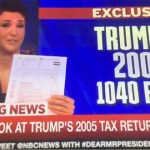 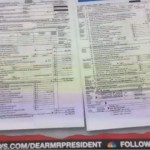 You go lady! Rachel Maddow stopped by ‘The Tonight Show’ Mar. 15, one day after exclusively breaking the news of Donald Trump’s 2005 tax returns. We’ve got the details on how she thinks the president very well may have been the person who leaked the documents.

Journalist of the moment Rachel Maddow, 43, is doing a victory lap after exclusively breaking details of Donald Trump‘s 2005 tax returns with a stop by The Tonight Show. She got a standing ovation when she came onstage, which proves what a hero she is! Maddow told host Jimmy Fallon, 42, that she believes it could easily have been Trump himself who leaked the documents, because not only did they NOT include any explosive information, Trump never threatened to sue over the leak as he’s so prone to do.

“One thing in favor is he’s the only person who could totally leak it without getting concerned about being sued by Trump or anyone else. It might have been him,” she revealed. Maddow is in the clear because she didn’t leak it, she just broadcasted the information after getting verification from the White House that the tax forms were valid.

“It feels like a big responsibility, I’ve got to get it right,” she said about making sure the tax info was credible and valid. “I want to be trustworthy to my audience and we’re going to get this thing answered about his finances, and we owe it to this country and we’re going to do it piece by piece,” vowing to keep on the story.

After Maddow announced that she had copies of Trump’s actual 2005 1040 form Mar. 14 and was going to reveal the contents on her MSNBC show, the White House in a pre-emptive strike released the details that he paid $38 million in taxes for $150 million in income earned. They also gave her a big scolding, saying in a statement that, “You know you are desperate for ratings when you are willing to violate the law to push a story about two pages of tax returns from over a decade ago.” They added that it is “totally illegal to steal and publish tax returns,” and bashed the “dishonest media,” even though Maddow was totally in the clear and did not break any laws.

While Trump may have had a tantrum over Maddow simply doing her job as a journalist, she received tons of praise from others for her courageous efforts. This was a big get for her and while the details didn’t turn out to be anything too explosive, she forced the president to release tax information, something that he has steadfastly refused to do ever since he decided to run for the office.

HollywoodLifers, what did you think of Rachel’s appearance on The Tonight Show?