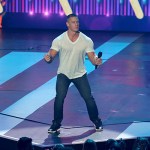 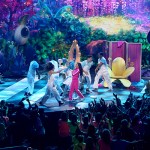 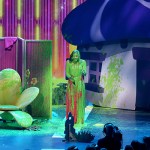 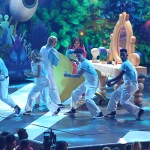 WHAT A SHOW! Now that the Kids’ Choice Awards 2017 has wrapped up, it’s time to revisit all of our favorite moments from the night. Out of all the slime, fashion, and talent, let’s take a look back at some of the epic highlights we’ll never forget!

OK, let’s just get this out of the way. One of our favorite moments from the 2017 Kids’ Choice Awards has got the be the amazing SLIME TUNNEL! A new addition to the award show, the tunnel of slime brought all kinds of talent on stage using a conveyor belt, making for an extremely messy situation right out the gate. These poor celebrities had no choice but to innocently stand there as green goo poured down from every angle. Who get it the best? Definitely Demi Lovato, Kevin Hart, and John Cena at the very end.

This year’s ceremony scored MAJOR points for creative new, fun, and interesting ways for celebs to either get slimed, or get up on stage. There was a slide, a podium that shot out confetti, an orange smoke gun, and a fire fighter’s pole! Oh, and did we even mention the performances yet? Dynamic duo Camila Cabello and MGK stunned on stage with “Bad Things” along with girl group Little Mix, who performed their smash singles “Shout Out To My Ex” and “Touch.”

WAIT, THERE’S MORE! Fans also got a taste of all the amazing new movies to come, including Wonder Woman, Smurfs: The Lost Village, and Guardians Of The Galaxy Vol. 2. The film stars Chris Pratt as Peter, AKA Star Lord, who was working the Kids’ Choice Awards backstage in the control center. Zoe Saldana, who plays Gamora, also made an appearance tonight in an adorable summery dress! Overall it was a seriously epic show!

HollywoodLifers, what was YOUR favorite moment from the 2017 Kids’ Choice Awards?