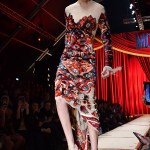 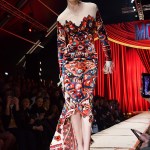 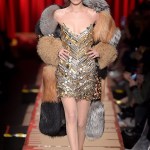 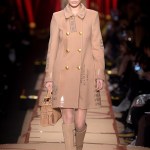 Gigi Hadid looked absolutely amazing when she strutted down the Max Mara runway in two sexy sheer looks during Milan Fashion Week in Italy on Feb. 23rd. We love both of her sheer looks and we can’t decide which was our fave. What do you think? VOTE.

Gigi Hadid, 21, has been taking Fashion Month by storm and she has walked in a ton of different shows from New York to London to Milan. Her latest runway was for the Max Mara Autumn/Winter 2017 show during Milan Fashion Week, and she rocked two different sheer looks that were both equally as sexy. We can’t decide which outfit we liked better — what do you guys think?

Gigi’s first look of the day was a pair of high-waisted, black velvet wide-leg trousers with pockets. Tucked into her pants was a completely sheer black turtleneck sweater that completely flashed her white bra underneath. She paired the entire look with pointy-toed boots and a giant fluffy, floor-length black jacket which she draped over her shoulders.

Her second look from the show was similar but much more vibrant. She hit the runway in a bright red ensemble that we are obsessed with. She rocked a pair of low-waisted red velvet culottes and tucked the same turtleneck sweater that she wore earlier, into the pants, but this time in red. The sheer shirt also flashed her white bra again. Topping off the entire outfit was a fluffy red fur floor-length coat and a pair of red leather pointy-toed pumps.

What did you guys think of Gigi’s runway looks? Which one was your favorite? VOTE.