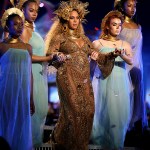 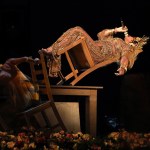 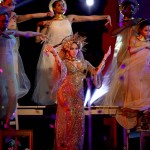 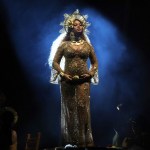 Slay, Bey! Beyonce owned the Grammys stage on Feb. 12 and she showed off her sexy baby bump in a gold bikini! Not only did queen B put on an incredible show, but she put her future babies on display! You have to see her baby bump!

Beyonce, 35, bared her pregnant belly to the Grammys audience on Feb 12 in a sexy gold bikini and we’re obsessed! The singer showed off her twins-to-be in the beginning of her Grammys performance and she’s never looked better. Beyonce slowed things down with “Sandcastles” and “Love Drought” from her record breaking Lemonade album and she impressed the audience with a deep speech about motherhood.

Although the stunning singer didn’t put on an upbeat, choreographed performance, she proved that she can awe any crowd with her versatile talent. That wasn’t a surprise at all. Bey rocked a lavish, plunging gold dress for her performance and a gold angelic crown. Her daughter, Blue Ivy, 5, hubby, Jay Z, 47, cheered her on in the crowd and it was seriously the cutest thing we’ve ever seen.

Bey’s Grammys performance was the first time she was seen out in public since announcing that she was pregnant with twins Feb. 1. Right after her epic performance, Bey took home the award for “Best Urban Contemporary Album” and thanked her husband and daughter during her acceptance speech. She even reflected on her work of art, Lemonade, during her speech as well. “My intention for the film and album [of Lemonade] was to create a body of work that will give a voice of our pain, our struggles, our darkness and our history. To confront issues that make us uncomfortable.” Amazing. It’s also important for us to add that Bey had nine nominations for the 2017 Grammys.

Beyonce shocked the world on Feb. 1, when she announced that she and Jay were expecting twins! The singer uploaded a photo of her bare baby bump to Instagram and captioned the gorgeous photo, “We would like to share our love and happiness. We have been blessed two times over. We are incredibly grateful that our family will be growing by two, and we thank you for your well wishes. – The Carters.” How cute, right?! She followed her internet-breaking news with a jaw-dropping photoshoot that showed off her pregnant baby bump.

The news of Bey’s pregnancy came as shock to most people because she and Jay’s marriage was speculated to be on the rocks. On her Lemonade album, Bey revealed some shocked lyrics that painted a picture of betrayal from a lover. But, she and Jay obviously didn’t let the split speculation tear them apart. We’re so happy for the star couple!

HollywoodLifers, what did you think of Beyonce’s performance? Tell us below!