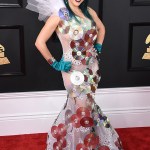 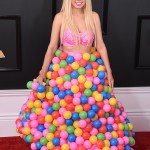 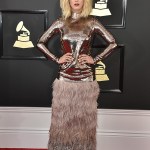 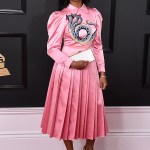 Adele was set to lead the George Michael Tribute at the 2017 Grammys on Feb. 12, but instead she stopped the show and cussed on live TV! The singer cut the tribute short when she realized there was something terribly wrong with her performance. Get the details right here!

Adele, 28, stunned the Grammys crowd on Feb. 12 when she stopped her tribute performance to George Michael! She dropped an F-bomb, live on the Grammys stage when she experienced technical issues. “I can’t do it again like last year,” she said. “I’m sorry for swearing. I can’t mess this up for him.” She added, “Sorry Ken,” to Grammy exec producer Ken Ehrlich. The singer noticed that the beginning of her performance went terribly wrong and she told the audience that she had to start over. Adele had to do Michael justice by getting his tribute right, so she took things into her own hands…

“I’m sorry, I can’t mess this up for him” Adele said when she got completely emotional over the mishap. However, after she started the tribute over, Adele put on an amazing performance when she sang Michael’s 1996 song, “Fast Love”! Rihanna, 28, Chrissy Teigen, 31, and more stars in the audience cheered her on and praised Adele for her beautiful tribute to Michael. Past photos of the late artist were displayed in the back of Adele as she paid tribute to the iconic artist who passed too soon. When Adele finished the song, she was visibly in tears. Although she cussed after suffering technical difficulties, Adele received a standing ovation after her performance.

The singer had to take the stage once again when she accepted the Grammy for “Best Song of the Year” for her hit, “Hello”. Adele won the award moments after her performance, and she apologized to anyone she may have “offended” after she dropped an F-bomb. And, she wasn’t done there — Adele took home one of the biggest awards of the night for “Album of the Year”. But, she dedicated the award to Beyonce, 35, and her visual album, Lemonade. Adele and Bey were in tears while they shared the sweet moment together.

George Michael, a Grammy award winner, sadly passed away at the age of 50, on Dec. 25, 2016. He was found dead at his home in Goring in Oxfordshire, England, as a result of heart failure according to his rep. However, Michael wasn’t ill prior to his death according to multiple reports. At the time of his death, Michael’s manager Michael Lippan revealed that he had died of heart failure.

Michael’s boyfriend, Fadi Fawaz, 43, called 911 on Christmas day after he found him dead in bed. He reportedly told 911 dispatchers that Michael was unconscious in bed. Fawaz allegedly said that Michael was “cold and he’s blue … and he’s very stiff,” at the time of his reported frantic 911 call.

Fawaz tweeted an emotional response to his partner’s death just one day after discovering Michael allegedly unconscious in his bed.

ITs a xmas i will never forget finding your partner dead peacefully in bed first thing in the morning.. I will never stop missing you xx

An ambulance arrived at Michael’s home on Christmas afternoon in Oxfordshire, England, and just hours after his untimely death.

Michael sadly dealt with drug issues throughout his life. He was arrested for possession of Class C drugs in 2006, and plead guilty to driving unfit as a result of drugs in 2007. After his arrest, Michael was banned from driving for two years. In 2008, he was, once again arrested for possession after admitting that the majority of his problem was with cannabis. The issues continued in 2010 with when he was arrested for being unfit to drive through drugs. He spent four weeks in prison later that year, and was banned from driving for five years. Michael reportedly came out as gay after being arrested on charges of lewd conduct in a men’s room in Beverly Hills, Calif, as reported by the New York Times. The singing legend will truly be missed.

‘HollywoodLifers, wha did you think of Katy and Orlando? Tell us below!