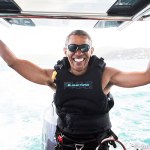 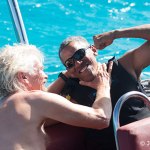 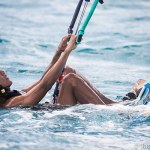 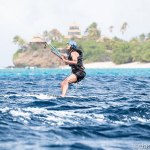 Hang ten, Barack Obama! With President Donald Trump in the White House, Barry was free to finally catch up on having fun. While vacationing on Sir Richard Branson’s private Island, Barack finally got a chance to do something he hasn’t been able to do for nearly a decade: go surfing! Gnarly!

After eight years of working one of the most stressful jobs on the planet, Barack Obama, 55, has earned himself a break. The 44th President of the United States treated himself to some surf and sun, vacationing with Sir Richard Branson, 66, on the Virgin Group billionaire’s private island, according to the Daily Mail.

Barack hit the crystal-clear waters for some kite surfing, which turns out, was the first time he was able to enjoy the waves since taking the Oath of Office. “One of the first stories Barack told me when he and Michelle [Obama, 53] arrived on Moskito Island was how, just before he became President, he had been surfing on a dangerous break in Hawaii,” Richard wrote in a blog post. “When he came in from an exhilarating session, the new head of his security team turned to him and said: ‘This will be the last time you surf for eight years.'”

“For the next eight years he didn’t have the chance to surf, enjoy water sports or do many of the things he loved. So it was tremendous to offer him the chance to learn to kitesurf,” Richard added. Though it was close to a decade since Barack last shot the curl, he seemed to quickly catch on to kite surfing. Sure, there were a few wipeouts, but after eight years of dry land, the Hawaiian-born Barack was probably glad to just be back in the water.

Barack and Michelle are setting all sorts of life goals. First they have an island vacation. Then, they throw one of the best Super Bowl parties around. The Obamas were back in Washington, D.C. to see the New England Patriots pull off the comeback victory over the Atlanta Falcons.

Pictures from Obamas party shows Barack having the time of his life, while his successor, President Donald Trump, 70, looked absolutely miserable while he spent the big game with his family and advisers. Maybe Trump was sad he couldn’t join Barack and Sir Richard in some “water sports” on Moskito Island?

Are you jealous of Barack’s vacation photos, HollywoodLifers? Are you glad that he’s having fun after serving his country?