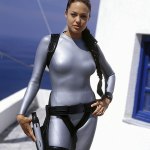 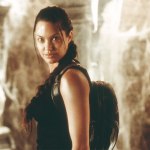 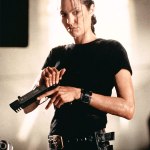 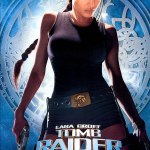 There’s a new Lara Croft in town! Alicia Vikander, 28, stepped into the epic role, just as Angelina Jolie did in the 2001 flick ‘Lara Croft: Tomb Raider’ and the 2003 sequel — and from the new photos, she looks like she’s killing it!

Alicia Vikander is brunette and badass! She was spotted rocking the trademark braid this week filming multiple stunts for the reboot of the film on set in South Africa. While we know that she’s taking on the epic role that Angelina Jolie played 14 years ago, it will be very different.

“They told me they were doing the film based on the reboot of the game from 2013,” Alicia told Uproxx in a recent interview. “That is more of an origin story. You get into an emotional aspect of getting to know Lara hopefully in an in-depth way. So I hope that doing a film of the rebooted game will bring something new and fresh that’ll stand on its own two legs.”

She also revealed she actually played the game as a kid. “I, with the rest of the world, was excited to see a female protagonist in a video game,” she said. “I was a bit scared playing it when I was 12, 13. I had to go take little breaks!”

Alicia came into the spotlight in 2016 when she took home the Academy Award for her role in The Danish Girl. Now, she’ll be heading up a huge film of a whole different genre — and starring alongside Walter Goggins, who’s playing Father Mathias Vogel, Dominic West, who’s playing Lord Richard Croft and Daniel Wu, who’s playing Lu Ren.

HollywoodLifers, what do you think of Alicia as Lara Croft?