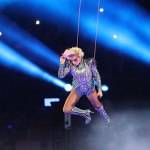 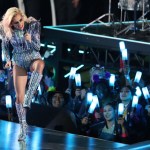 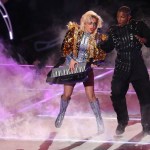 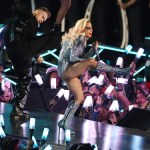 Gaga kicked off her performance standing on the roof, singing “God Bless America,” mixed with “This Land is Our Land,” and stating the pledge of allegiance before diving onto the stage and taking over for 13 minutes.

“I’m going to be taking the spirit of many performers with me on that stage when I go up there. I’m grateful to have wonderful women in this business that are supportive of me,” Lady Gaga, 30, said during the pre-show’s press conference. She also took to Instagram right before the game to share a little message for fans.

Gaga has said before that she’s wanted to do this performance since she was a little girl, so it’s no surprise that the singer, whose real name is Stefani Germanotta, absolutely killed it and did not play safe with her epic performance.

“The thing is, is it’s such a big world stage in terms of how many people see it and it’s been done so many times,” she said during the conference. “I think the challenge is to look at it and say, ‘What can I do differently, how can I elevate certain little things here and there and also make it about the music?'”

Well, she did just that! It was the perfect way to kick off 2017, and it was a great return for her — last year, she also was at the Super Bowl, but instead opened the game by nailing a performance of the National Anthem, while Beyonce, Coldplay and Bruno Mars took the stage at halftime.

HollywoodLifers, did you love Beyonce’s performance?