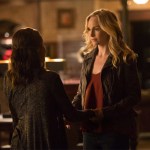 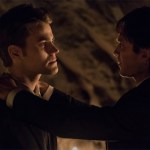 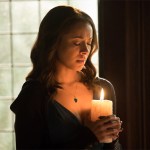 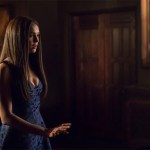 Cade’s return didn’t just set Stefan free onto Mystic Falls, it also targeted Caroline… and Elena. However, it was someone else who was killed in the process.

This week was a heavy one, Vampire Diaries fans, so brace yourself. First things first, Cade was back and ready to ruin everything. And well, he succeeded. Upon his arrival he set Stefan free and gave ultimatums to both Damon and Stefan — separately. They were to kill 100 strangers (who were bad people) or kill their brother’s girl. So Damon headed to Brooklyn to try to catch Stefan before he got to Elena.

Unfortunately for Damon, Stefan was one step ahead of him — Cade had read Bonnie’s mind earlier in the day to find out that she had hidden Elena’s body in a house in Upstate New York. So Stefan actually was on his way there.

Basically, everyone wanted that cure this week (it was like season six all over again); Bonnie and Enzo wanted him to take it so that they could get their happily ever after — and he was ready to; Stefan wanted Elena’s blood, just to kill her, and Caroline wanted to use it to kill Cade. Bonnie, being the friend she always is, agreed with Caroline — she’d wait to turn Enzo, but instead get the blood to give to Damon, so he could use it on Cade.

Unfortunately, Plan A or B or probably more like D, didn’t go so well. While drawing blood from Elena’s body inside the house, Stefan arrived. Since he had sold the house to her realtor — through compulsion of course — Enzo could no longer be inside. He wasn’t invited by the realtor. Stefan on the other hand was; so he ripped out Enzo’s heart and dropped it outside the door. He then attacked Bonnie, but she had just enough blood in the syringe from Elena’s body, so to save herself, she stabbed Stefan with it.

With that, Bonnie ran out and held Enzo’s body; I have to say, this was a good episode for them, and while she’s had some romances through the series, their bond was something we had never seen on her end; and now it was over. As she held his body on the front porch, and screamed, a ripple went through the air. Did Bonnie get her magic back from Enzo’s death? Maybe it had something to do with the Maxwell bell being in the car? Maybe it was the anger that came about when seeing him die? So many questions but one thing is for sure: human Stefan is going to have a lot of guilt to live with.

HollywoodLifers, leave all your thoughts about that insane ending in the comments below.