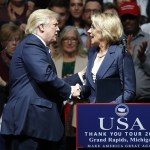 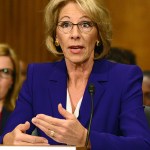 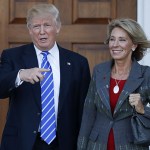 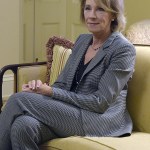 How Betsy DeVos’ Secretary of Education nomination cleared the Senate Committee has baffled Democrats when her major lack of experience and competence in the role was revealed in multiple hearings. But it’s time to face the hard truth; Betsy could be our new Education Secretary. It’s time to learn a few facts about her!

1. She wants guns in schools

Besty DeVos, 59, thinks guns should be allowed at all schools in the United States so teachers can protect their students from deadly threats…like grizzly bears. No, really. Betsy made this strange quip during her Senate confirmation hearing on January 18, referring to an anecdote Senator Mike Enzi told her about a school in Wyoming that had guns on campus to protect themselves from bears. That was false. The Daily Show contacted the school, and they simply have a fence around the school and bear spray in case anything happened!

2. She has strong ties to the Republican party

Betsy was Michigan’s Republican National Committeewoman from 1992 to 1997, as well as the chairwoman of the Michigan Republican Party from 1996 to 2000. She was reelected to the post in 2003. Her nomination as President Donald Trump‘s Secretary of Education is controversial, in part, because she’s been a longtime donor to the GOP. Betsy’s a billionaire, and her family has donated $17 million to the party since 1989. During George W. Bush’s administration, she served as the finance chairperson for the National Republican Senatorial Committee, and donated $150,000 to his reelection campaign in 2004.

3. She didn’t support Donald Trump in the 2016 presidential race

Betsy initially donated money to Jeb Bush and Carly Fiorina’s 2016 presidential campaigns. She finally decided to support Marco Rubio as her candidate, and donated to him as well. She called Trump and “interloper,” and said that he didn’t “represent the Republican Party.” Well, she changed her tune pretty quickly when he nominated her to his cabinet!

4. She supports charter schools over public and private education

Betsy has been a longtime advocate for charter schools, saying that they give parents more choice over their children’s education than what public and private schools can provide. The problem with her becoming Secretary of Education lies within the fact that she must be a champion of all schools within the United States, no matter what they are; she has to take care of all American students equally. She was criticized by Senator Elizabeth Warren during her confirmation hearing that by being a billionaire, she doesn’t understand the plight of students struggling to afford a good education; nobody in her family has ever had to take out a student loan.

She and her husband are the head of the All Children Matter PAC, founded in 2003, which promotes school vouchers, tax credits to businesses that give private school scholarships, and candidates who support these causes. The PAC was fined $5.2 million in 2008 after the Ohio Elections Commission accused it of campaign spending violations. The PAC hasn’t paid the fine as of 2017.

5. She was accused of plagiarism in her Senate questionnaire

Betsy was required to submit written answers to hundreds of questions to the Senate as part of her confirmation process, and in at least two instances, appeared to plagiarize a 2016 statement from Principal Deputy Assistant Attorney General Vanita Gupta. A question Betsy answered about civil rights for transgender students appeared to be lifted from a press release written by Gupta who headed Barack Obama‘s Civil Rights Division at the Justice Department. Trump education adviser Rob Goad called the accusation “character assassination.”

HollywoodLifers, do you want Betsy to be the Education Secretary? Tell us in the comments.