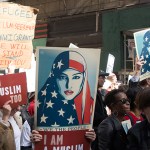 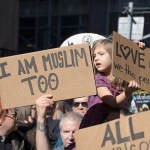 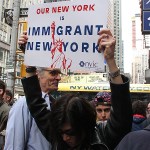 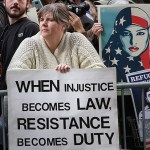 Bella Hadid found the perfect way to distract herself from Selena Gomez and The Weeknd’s romantic trip to Italy — protesting Donald Trump’s immigration ban! Bella and her sister Gigi Hadid were ready for action and HollywoodLife.com has all the details.

While most of us spend an unhealthy amount of time Facebook stalking our exes when they go on vacation, Bella Hadid put her heartbreak into action over the weekend. On Jan. 29, the 20-year-old model took to the streets of New York City, alongside her sister Gigi Hadid, 21, in protest of Donald Trump‘s executive order on immigration. Many see the ban on immigrants, from seven Muslim-majority countries in the Middle East, as a roundabout to the banning of Muslim’s from entering the United States… something that hits close to home for both models and their family.

Spotted with a sign raised, and what appears to be a Slurpee in her hand, Bella might have been using the protest as a distraction from Selena Gomez and The Weeknd‘s romantic Italian vacation. “We are all Hundus, Buddhists, Muslims, Atheists, Christians, Jews,” her signed proclaimed while highlighting certain letters in each word to spell out HUMANS.

It makes sense Gigi and Bella would be upset with the President’s action on Muslims, perceived or otherwise. Their father Mohamed Hadid is Muslim immigrant who once lived in Syria (one of the banned countries). Gigi’s boyfriend, Zayn Malik, is also a Muslim. They aren’t the only celebrities upset with Mr. Trump. Many of the night’s winners at this year’s Screen Actor’s Guild Awards used their stage time to speak out on the actions Julia Louis-Dreyfus called “un-American.”

Between news that their relationship might’ve started A LOT longer ago than any of us first believe and the PDA-packed pics coming out of Itlay, Selena and the “Starboy” singer have had a busy week. The same day Bella walked alongside other angry New Yorkers, Sel and The Weeknd had the nerve to kiss and hug each other in public! Up until now they have kept a somewhat low profile, in spite of the aforementioned news regarding their rumored love affair.

HollywoodLifers, how are you feeling about celebrities standing up for what they believe in? Is it Hollywood’s place to criticize the government?