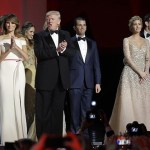 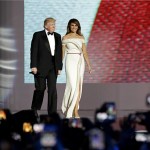 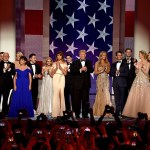 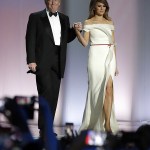 Melania Trump channeled former First Lady Jacqueline Kennedy on the morning of Donald Trump’s Inauguration, as she stepped out next to her hubby in a chic blue Ralph Lauren suit for church services, serving up a vintage vibe that evoked Jackie’s iconic style. Did you love her look?

All eyes were on Melania Trump as she stepped out in a beautiful, baby blue dress and matching cropped coat for a prayer service at St. John’s Episcopal Chuch on Jan. 20, Inauguration Day, in Washington D.C. where she showed off a matching Ralph Lauren ensemble for the occasion. From the detailing of the coat to the matching gloves and pointy pumps, Melania’s look totally channeled former First Lady Jacqueline Kennedy as the couple headed to the traditional Inaugural Day service ahead of Donald Trump‘s swearing-in ceremony. In fact, Jackie rocked a blue suit by designer Oleg Cassini for John F. Kennedy’s inauguration in 1961.

Melania looked perfectly put together in her Ralph Lauren ensemble and we can’t wait to see what else she’ll wear throughout the big day. The night before Inauguration Day she accompanied Donald to Arlington National Cemetery and to The Make America Great Again! Welcome Celebration concert at the Lincoln Memorial in a military-inspired coat by NYC designer Norisol Ferrari. The design of the silhouette was meant to pay homage to those who served the country — a special and symbolic fashion choice. The future first lady rocked two looks in one day, trading her sleek coat for a sparkling gown by Reem Acra which fit her figure like a glove. The NYC designer is a staple on the red carpet and Melania looked beyond glam in the long-sleeved silhouette as she accompanied Donald to dinner on the night before the Inauguration.

What did you think of Melania’s blue suit for church services? Did you love her look on the morning of Inauguration Day?