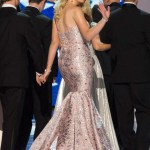 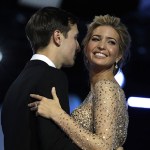 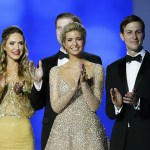 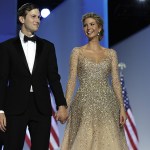 It’s party time! We knew Donald and Melania Trump would bring plenty of glitz to his inaugural balls, and boy did they ever shine! We’ve got all of their big moments in photos as our new president and first lady enjoyed the festivities that went down in their honor.

Such glamour! Our new President Donald Trump, 70, and First Lady Melania, 46, got dressed to the nines to celebrate the tycoon becoming our 45th leader. The pair attended a total of three galas, with the Liberty Ball being the first stop to get the night going Jan. 20. Things kicked off with a faith-based performance by gospel star Travis Greene, 33, singing his grammy nominated song “Intentional,” which totally moved the audience. That was followed up by R&B singer Chrisette Michele, 34, giving a rousing rendition of “Mack the Knife,” changing the iconic lyrics at the end to “The Donald’s back in town.”

The Rockettes brought down the house, even though they appeared to be missing some members who had protested performing for Donald due to his misogynistic messages on the campaign trail. The hoofers that were there kicked it to a medley of hits from composer Irving Berlin while wearing their iconic sparkly uniforms. The kids group Pelican 212 performed a medley of peppy and upbeat classic hits from the likes of the Jackson 5 and more that helped set the happy mood for the night.

The evening’s main event followed all of the amazing performances, as Donald and Melania finally appeared onstage, with the first lady looking so elegant in a flowing off-the-shoulder white gown with a red belt. The couple had their first dance to Frank Sinatra‘s classic “My Way.” Of course Donald would pick that song!

The tycoon and his wife called it an early evening compared to his predecessors. Barack, 55, and Michelle Obama, 53, attended a grand total of ten balls following his inauguration in 2009, while Bill, 70, and Hillary Clinton, 69, attended a whopping 14 balls in 1993. It’s kind of disappointing that the new first couple only attended only three galas, but the lack of major entertainers willing to participate at the events definitely made for a lot less sparkle. Still, we loved every second of the talent was willing to come and perform.

HollywoodLifers, what did you think of the president and first lady’s inaugural ball appearances? Did they bring the right amount of glitz and glamour?