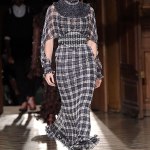 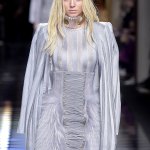 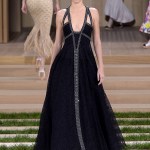 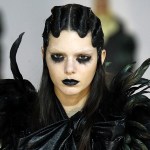 Paris Fashion Week is in full swing and two of our favorite models, Kendall Jenner and Bella Hadid, totally shut it down on the runway with their latest looks.

Kendall Jenner, 21, and Bella Hadid, 20, took the Givenchy runway by storm at the Bibliothèque Nationale de France during men’s fashion week in Paris on Jan. 20 where they rocked two seriously stylish outfits from the Spring 2017 Haute Couture collection, evoking vintage Americana vibes as they rocked the catwalk.

Bella’s dress reminded us of something we would expect to see on Lady Mary in Downton Abbey as she made a grand entrance in a sleeveless, high-neck frock that featured feather detailing on the skirt, giving the long dress great movement as she strutted down the runway. The vintage vibe continued with the styling as Bella rocked lace tights with her sandals, giving the get-up a seamless appearance. The major model made headlines last year when she walked in the Victoria’s Secret Fashion Show for the very first time and it looks like 2017 is totally going to be Bella’s year. In fact, she already landed two high-fashion campaigns! Bella posed for both Fendi and Moschino with her sister, Gigi Hadid.

Kendall was also rocking a long dress as she emerged at the Givenchy show, all decked out in a pretty plaid frock which was paired with matching plaid tights and shoes. An embellished collar and matching plaid belt really set the look apart when she came down the runway.

Both models wore their brown hair parted down the middle and secured back with a clip on each side, which kept the focus on the detailing of the dresses and the necklines of the outfits. They also rocked barely any makeup, staying true to the no-makeup makeup trend that seems to be a favorite on the runway.

Check out their looks above and let us know what you thought of the Givenchy show.