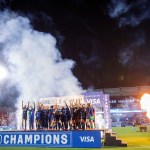 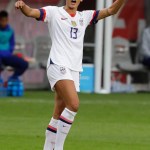 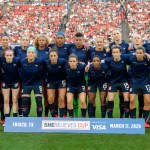 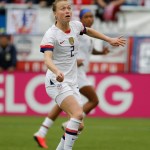 It came down to three of the best soccer players in the world: Carli Lloyd, Melanie Behringer and Marta! Only one of these superstars could win the the best FIFA Women’s Player Of The Year award, and on Jan. 9, it was Carli who was crowned queen of the soccer world!

Before FIFA could name either Cristiano Ronaldo, 31, Lionel Messi, 29, or Antoine Griezmann, 25, as the best FIFA Men’s player of the year, the soccer organization had some more important business to take care of: naming the best female player of the year!

Carli Lloyd, 34, Melanie Behringer, 31, and Marta, 30, eagerly awaited to see who would take home the trophy and after all the votes were counted, it was Carli who was chosen as the best women’s soccer player in all of FIFA.

Congratulations! Of course, either of these three women were worthy of the honor. Melanie helped her native country of Germany win gold during the Rio 2016 Olympics, according to FIFA.com. She started in all six matches and scored the opening goal in three consecutive games. She would go on to be the top scorer in the Olympic tournament. Wow! Sadly, she retired from international play, per SB Nation, hanging up her cleats with 123 caps. Thankfully, she’s still active with her club, Bayern Munich.

While Carli couldn’t lead the US Women’s National Team to medal during the Olympics (the first time they failed to land on the podium in history) her professionalism after losing is why she’s considered the best in the world. We can learn from this moment. It will make us hungrier, make us dig deeper and you best believe in 2019, we’re going to win a World Cup,” she said after the loss. The 2015 FIFA Player of the Year remains the face of US Women’s soccer and hopes to add more gold around her neck.

Then, there’s Marta. Born Marta Vieira da Silva, the Brazilian soccer star has been nominated for “the most prestigious award in women’s football” for 12 of the last 13 times. Her year hasn’t been one with much success. She and Brazil failed to defeat Canada for the bronze medal at Rio 2016. Plus, while playing for Rosengard FC in the Swedish football league, she and her team couldn’t add another title to their collection. Still, she remains one of the best players in the world and looks to make 2017 her year.

What do you think about FIFA’s choice for the best Women’s player of the year, HollywoodLifers? Do you agree with the choice?