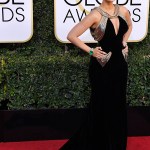 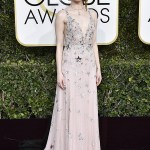 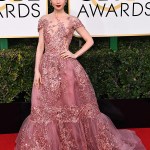 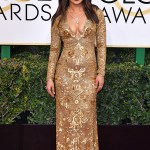 Another awards show, another red carpet Priyanka Chopra slayed. The ‘Quantico’ star shimmered in a sparkling gold gown at the 2017 Golden Globes on Jan. 8. Priyanka looked so flawless! Bow down!

Priyanka Chopra, 34, channeled the Golden Globe Award with her breathtaking gold gown designed by Ralph Lauren. Talk about putting the GOLD in Golden Globes! Every single inch of her gown sparkled on the red carpet. She wore a beautiful diamond pendant that fell just above some serious cleavage. Priyanka is the QUEEN of awards shows!

Priyanka wore her hair down in loose waves. Her dark lip sexy smokey eye made her Golden Globes look really pop. She was definitely one of the best dressed of the night!

Priyanka, who is presenting during the show, still hadn’t chosen her Golden Globes dress four days before the show! She posted a cute Boomerang on Instagram to showcase the many beautiful dresses she had to choose from. “Sometimes too many options aren’t a good thing… #GoldenGlobes #GirlProblems suggestions?” she captioned the Jan. 5 video.

The actress and new Pantene brand ambassador totally won 2016, and she’s looking to take over 2017 as well. She’s not only in the midst of filming Quantico season 2, she’s got Baywatch hitting theaters in May 2017. She’ll play a sexy villain alongside Dwayne Johnson and Zac Efron.

The 2017 show will be Priyanka’s first-ever Golden Globes. Can you believe it? She certainly made one heck of a statement! Before the Globes, Priyanka wowed in a gorgeous red dress at the Emmys. At the Oscars, she stunned in a sheer white gown designed by Zuhair Murad. Her Golden Globes dress definitely ranks among her best looks of ever!

HollywoodLifers, what do you think of Priyanka’s dress at the Golden Globes? Let us know your thoughts in the comments below!