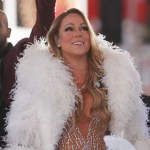 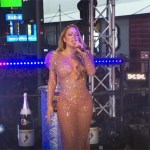 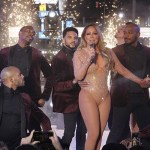 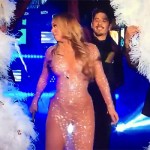 OMG! Mariah Carey performed a medley of songs on ‘Dick Clark’s New Year’s Rockin’ Eve’ special, but things didn’t go as well as planned on Dec. 31. The songstress literally walked off stage after having technical difficulties, proving she was lip-syncing! See the clips!

Mariah Carey, 46, gave her last performance of 2016, taking the stage for Dick Clark’s New Year’s Rockin’ Eve with Ryan Seacrest special, but unfortunately she suffered a very embarrassing moment. She walked off stage after having technical difficulties, which proved she lip-synced. When singing “Emotions,” the vocal track malfunction threw off the timing of her performance. Mariah was trying to keep a smile while singing for over one million people in Times Square, but it was clearly hard. She ended up making her exit after getting flustered!

The vocal track malfunction was also noticeable when she was performing “We Belong Together.” Her beau Bryan Tanaka, 33, and twins Moroccan and Monroe, five, were also there! Even though things didn’t go as expected, she still looked lovely in her sequinned get-up, and hopefully her boyfriend will comfort her. What a cringe-worthy way to end 2016! Ahead of the show, Mariah gushed about having the honor. “I am so excited to return and feel blessed to be a part of this year’s magical celebration,” she said about the show on ABC. “I can’t wait to perform once again for my incredible fans as we ring in the New Year.” She’s a trooper and we still love her!

Click Here For Pics Of The Best Rockin’ NYE Performances

Ryan [Seacrest] also felt very pleased to book the A-list songstress for this year’s celebrations. “Mariah was the first live performance from Times Square in 2005 when I joined Dick Clark as co-host,” he revealed. “After nearly a decade, I’m excited to join her again in Times Square, along with all our incredible performances, to ring in 2017.” The radio personality and executive producer definitely slayed the game when it came to booking A-list talent for the gig, boasting performances from DNCE, Fifth Harmony, John Legend, Gloria Estefan and more. Fergie hosted and Jenny McCarthy even reported live from Times Square, making us want an encore!

HollywoodLifers, what did you think of Mariah Carey’s NYE performance? Let us know!