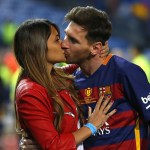 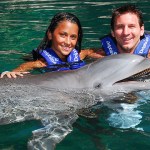 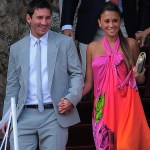 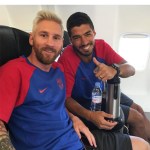 Is it time to start shopping for a wedding present for Lionel Messi and Antonella Roccuzzo? After nearly a decade together, a new report claims the Barcelona star plans to wed the mother of his two children in a huge ceremony in 2017. How sweet!

What would someone get Lionel Messi, 29, as a wedding gift? After all, the five-time Ballon d’Or winner has practically everything, including the love of his life: Antonella Roccuzzo! Lionel reportedly plans on marrying his 28-year-old girlfriend sometime in “the middle of next year,” a relative told La Capital. Juan Pablo Varsky, a reporter for La Nacion, also said that these two will tie the knot in 2017, according to the Daily Mail.

This reported wedding may likely happen at the Cathedral Basilica of Our Lady of the Rosary in Rosario, Argentina, according to the Mail.  The reception will be at Messi’s family home. He’s expected to invite the entire Barcelona squad, as well as his teammates on Argentina’s national squad.

Now, the big question is “when?” With the alleged relative claiming “middle of next year,” some think the date might be close to Lionel’s birthday. He was born on June 24, and he’s expected to wrap up Barca’s season around June 12. Could Messi get married on the same day he was born? Or will he keep those two special occasions separate?

These two have been together for so long, Lionel and Antonella are practically married already! The two began dating in 2008, though they’ve known each other since he was five years old. Antonella happens to be the cousin of his childhood friend, Lucas Scaglia, a fellow footballer. Antonella and Lionel both grew up in Santa Fe, Argentina, before he, at 13 years of age, left to seek international soccer stardom in Barcelona, according to The Sun.

Antonella and Lionel reconnected when he was around 20, and they kept their relationship a secret for a year. He eventually confirmed they were together in 2009 interview. Since then, they’ve been the First Couple of soccer, even having a pair of sweet boys together: Thaigo, 4, and Mateo, born in 2015. Expect their boys to be adorable parts of the ceremony. Though – here’s another question: will Lionel invite Cristiano Ronaldo, 31, his biggest rival and the player who just beat him for the 2016 Ballon d’Or? We’ll just have to wait and see.

What do you think about this report of Lionel and Antonella’s wedding, HollywoodLifers? Are you counting down the days until these two tie the knot?