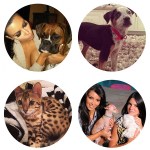 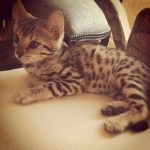 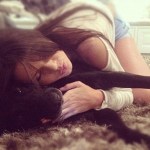 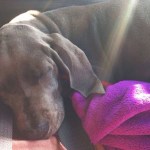 Say hello to the latest blue-eyed addition to Kylie Jenner’s growing four-legged brood! Kylie debuted an adorable new Husky puppy via her Snapchat on Dec. 11. that is nothing short of precious!

Kylie Jenner, 19, welcomed another new pup to her ever-expanding pack of dogs. She showed off a frisky and awfully cute black and white husky in her Snapchat story.

“He’s having a hard time fitting in lol,” the Lip Kit creator captioned one video as the yet-to-be-named pup scampered about in her yard while trying to befriend her other dogs playing in the distance. In picture, Kylie posed beside a white sofa in an oversized mustard t-shirt and black shorts as the lovable husky cozied up to his new owner.

Kylie’s sister, Khloe Kardashian, 32, stopped by to meet the perky new pup. Kylie filmed Khloe snuggling with the Husky and Kylie’s long-haired Dachshund who joined the family in March. “The dog whisperer,” Kylie jokes as her sister coddles the pooches, while one of Kylie’s greyhounds (two of whom recently became parents) perches on the sofa.

Kylie’s love for her pets knows no bounds as she proved when she skipped out on attending the American Music Awards because one of her greyhounds, Bambi went into labor. The entrepreneur discovered Bambi became pregnant by her other greyhound Norman and she decided to keep the puppies, naming them Dawn and Blue.

The reality star definitely has a knack for the cutest names and has certainly been feeling maternal lately since she has been swooning over Dream Kardashian. Kylie posted the sweetest pic of herself with her new niece and a source reported to HollywoodLife.com Jenner “can’t wait to be a mother,” and said holding the newborn “mesmerized” her.

Looks like Kylie has plenty of love to give her newest four-legged friend and no doubt Jenner will make sure the pup bonds with all his new doggy siblings!

HollywoodLifers, how precious is Kylie’s new puppy? Tell us below!