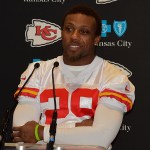 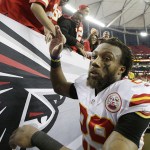 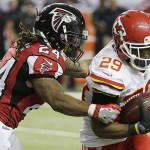 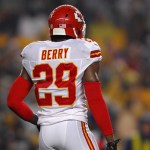 The Kansas City Chiefs defeated the Atlanta Falcons on Dec. 4, all thanks to Eric Berry. Yet, the NFL star almost didn’t make the game, as Eric nearly lost his career to cancer! As Eric enjoys this victory, get to know more about the man called the ‘heart and soul’ of his team.

Eric, 27, quite literally won the game for the Kansas City Chiefs. Not only did he pull off a pick-six, intercepting a pass from Atlanta Falcons’ quarterback Matt Ryan, 31, to run it back for a touchdown, but Eric’s second interception sealed the win for the Chiefs. Eric snatched a pass on a two-point conversion and ran it back to give Kansas City a 29-28 win over the Falcons.

That moment couldn’t be any more emotional for Eric because it nearly didn’t happen. Two years prior, he was diagnosed with Hodgkin’s lymphoma. Thankfully, after nine months of chemotherapy and treatment, Eric was cleared to return in 2015.

2. This win was extra special for Eric.

Eric is an Atlanta native, and the homecoming gave him a mixed bag of emotions. “The last time I came home during the season was to get chemotherapy,” Eric said after the win, according to SB Nation. “So this time it was actually for the game, so I was just thankful for the opportunity. And I take pride in a lot of things that people take for granted, so when opportunities come my way, I just cherish them and try to make the most of them.”

4. Eric’s more than just a safety for the Chiefs.

“Eric is the heart and soul of this team, the embodiment of what we’re about,” Chiefs quarterback Alex Smith, 32, said, per The Kansas City Star. “That’s selflessness, hard work, giving it up for the guy next to you. That’s all Eric talks about, and it’s real, it’s sincere…and it’s from the heart.” That heart was on display during the game. He gave his mother the ball after the first pick-six and he gave the two-point conversion ball to his father! How sweet.

5. Sports run in his family.

Eric’s father, James Berry, was a running back for the University of Tennessee. Eric’s young brothers, twins Elliot and Evan Berry, are playing at Tennessee. His family will be watching as Eric leads the 93- Chiefs to their next game against the Oakland Raiders on Dec. 8. That’s going to be wild!

What do you think about Eric, HollywoodLifers? Do you think the Chiefs will make it to the Super Bowl?