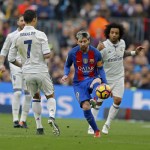 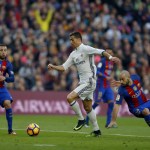 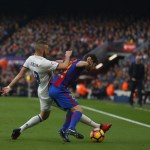 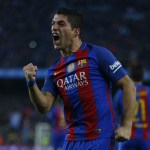 The nerves were running high for Barcelona and Real Madrid fans at El Clasico on Dec. 3 — and Shakira did NOT hide her anxiety as she watched from the crowd. The singer’s longtime boyfriend, Gerard Pique, plays for Barcelona, and she was an absolute WRECK throughout the game. Watch here!

Cameras caught Shakira in the stands throughout the entire El Clasico match on Dec. 3, and her emotions were at an all-time high with each sighting! From excitement, to nervousness to absolute devastation, Shak’s various reactions were written on her face as she cheered on her boyfriend, Gerard Pique. And when all the clips are put together into one montage…it’s pretty hilarious. Check it out:

A match between Barcelona and Real Madrid is always full of energy and tension, and it was no different at this year’s El Clasico — especially when Sergio Ramos’ late-game goal meant the battle ended in a tie, devastating fans of Barcelona, who were ahead 1-0 for most of the game. That, of course, included Shakira, whose boyfriend plays for the Barcelona club, and you can see her absolute heartbreak in the video as the lead slips away. Luis Suarez scored Barcelona’s only goal earlier in the game.

Shakira and Gerard met on the set of her music video in 2010, although she was still with her longtime boyfriend, Antonio de la Rua at the time. After the split, she got together with Gerard, and by Sept. 2012, they were expecting their first child together. Their son, Milan, was born in Jan. 2013, and two years later they welcomed a second son, Sasha. Hopefully the family will be able to recover from the outcome of this game!

HollywoodLifers, what do you think of Shakira’s reaction to El Clasico? Who did you want to win the game?